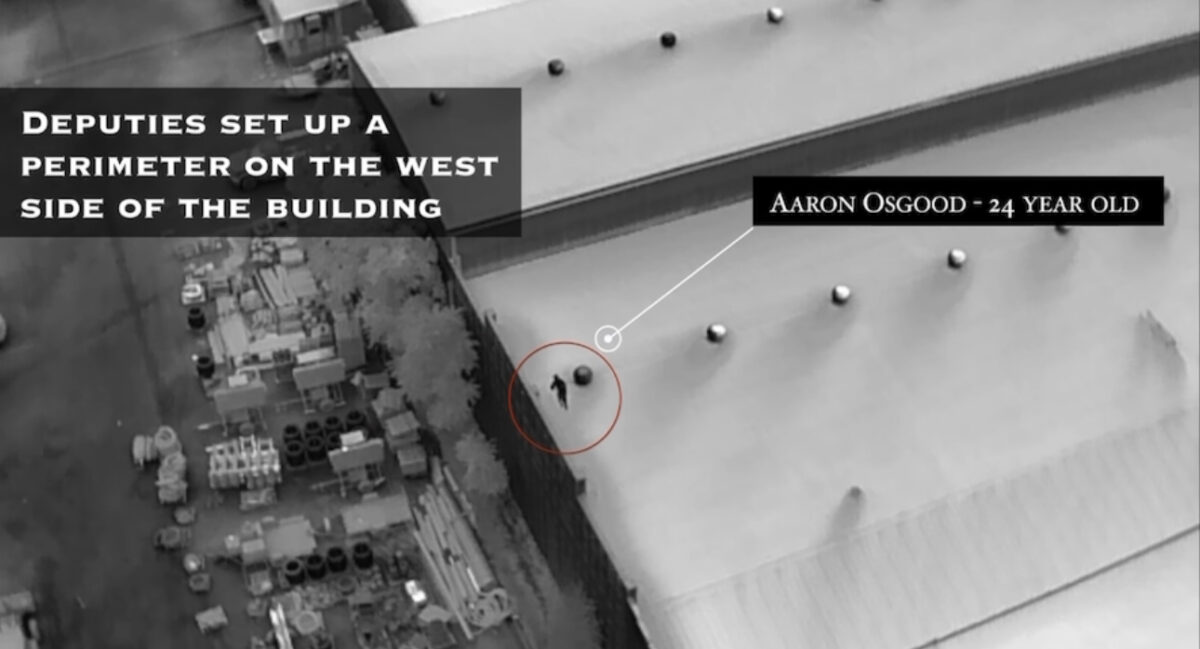 A Sniper turned his weapon on himself after shooting at police multiple times. Viewed Discretion is Advised.

“Man Shoots at Deputies and Then Takes His Own Life

On November 16, 2022 at about 10:54 P.M., deputies attempted to conduct a traffic stop on a vehicle driving recklessly on Yosemite Boulevard and N. Santa Cruz Ave in Modesto. The driver, later identified as Ceres resident 24-year-old Aaron Osgood, fled on foot into an adjacent business in the 100 Block of Empire Ave. Assisting deputies arrived on scene and established a perimeter around the business. Deputies on the perimeter mentioned that they saw someone on the roof of the warehouse. A drone was deployed and confirmed that Osgood was on the roof. Several announcements were made for Osgood to surrender, but he did not comply with any commands given.

Through the drone, Osgood was seen crawling to different areas of the rooftop. At 11:15 P.M. Osgood crawled towards the edge of the roof facing in the direction where several deputies were and fired three shots at them. Deputies immediately took cover and did not return fire. Osgood then shot himself. After broadcasting over the radio that shots had been fired, about 10 officers from the Modesto and Ceres Police Departments responded to the location to assist the 10 deputies.

While maintaining drone surveillance, a team made up of deputies and officers was created to make contact with Osgood. The fire department was asked to respond to the scene to provide ladders that could be used to access the rooftop of the warehouse. Low temperatures caused the metal roofing to have a thin layer of ice, causing deputies and officers to have to walk slowly towards Osgood’s location.

At about 12:19 A.M. deputies contacted Osgood and confirmed he was deceased due to a self-inflicted gunshot wound. A firearm was located near his right hand, which was later determined to be stolen, along with the vehicle he was driving. A records check revealed Osgood had several felony arrest warrants.”