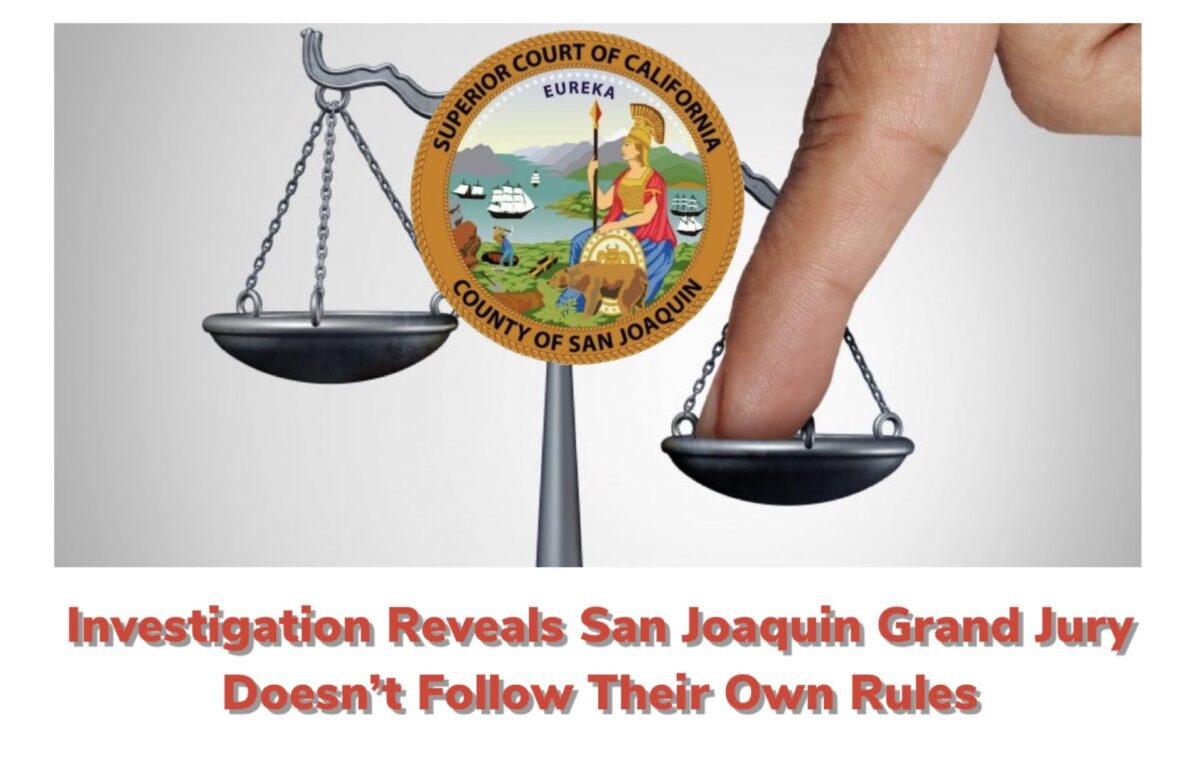 SAN JOAQUIN COUNTY- An investigation has revealed that the same grand jury that is being used to launch political attacks on the Stockton Unified School District for “not following their own rules”, doesn’t…you guessed it…follow their own rules governing how a grand jury is supposed to even function. Public records reveal that some jurors are openly violating rules of service. The following letter has been sent to the District Attorney, who was just voted out of office in great part for using her position to play politics. It appears the Grand Jury is also doing the same.

According to official San Joaquin Civil Grand Jury records, from 2013 to 2020 Ward Downs served six out of eight years, and by doing so directly violated the Grand Jury’s own written policies which states the following:

“You cannot be considered for selection if you have served for any California court within the previous year.”

Please explain how, why and who authorized Ward Downs to flagrantly violate this policy.

It appears Mr. Downs was already in violation of Grand Jury selection rules when he was involved in assisting DA Tori Verber’s cover up of Sheriff Steve Moore’s public embezzlement of an evidence gun. We believe, based on documentary evidence and interviews, the San Joaquin District Attorney’s office failed to disclose to even some of their own investigators that the DA’s office was also receiving “substantial discounts” from the same Bay Area gun dealer Moore was laundering evidence guns through.  We do know Moore converted evidence guns into the personal use of deputies (including himself) in a manner that was in clear violation of State law.  District Attorney Verber and Mr. Downs should be investigated for failing to disclose this egregious conflict of interest, but since the Grand Jury itself seems to have trouble following their own rules, and DA Verber is embroiled in her own problems, that appears to be an exercise in futility.

“There was virtually no missing evidence,” said Ward Downs, grand jury spokesman. “There was mislaid evidence.”

“The report is not a complete vindication of Sheriff Steve Moore. It states that 420 pieces of evidence for 271 cases are missing. The items include weapons, drugs and money.”

“Not a complete vindication” could be considered for the understatement of the decade, except that it was so typical of Fitzgerald’s biased reporting prior to him being removed from the Record’s sinking ship.  To add insult to injury, the Grand Jury was previously compromised by the Record’s own Eric Grunder, whom also served back to back terms from 2014 to 2016, once again in violation of the Grand Jury’s own policy.

Despite Steve Moore clearly being guilty of public embezzlement, Downs and the grand jury allowed Moore to “audit” the very evidence room Moore himself was stealing from.  Of course the compromised Stockton Record and their soon to be falling star Michael Fitzgerald didn’t alert the public of just how clearly inappropriate this egregious conflict of interest was.

The following two paragraphs Fitzgerald wrote can’t be reconciled because the ugly truth is Steve Moore personally publicly embezzled at least one gun, reference 11-18774, .22 Colt 6″ (002755S), and was also suspected of being responsible for the “misplacing” of other “guns, drugs and money”. Fitzgerald knew it, the Stockton Record editorial board knew it, DA Tori Verber knew it, Sheriff Moore knew it,, and so did Grand Jury foreman Ward Downs.

This incestuous scenario perfectly illustrates why the San Joaquin County Grand Jury itself needs to be criminally investigated for gross malfeasance. Please let us know what actions you plan to take to rectify this situation moving forward. There must be a mechanism in place to investigate a corrupt civil grand jury.  Please let us know what that is and execute it immediately.

It appears the Stockton Cabal is busy at work with the Grand Jury and their attempt to manipulate the public via the mainstream media.