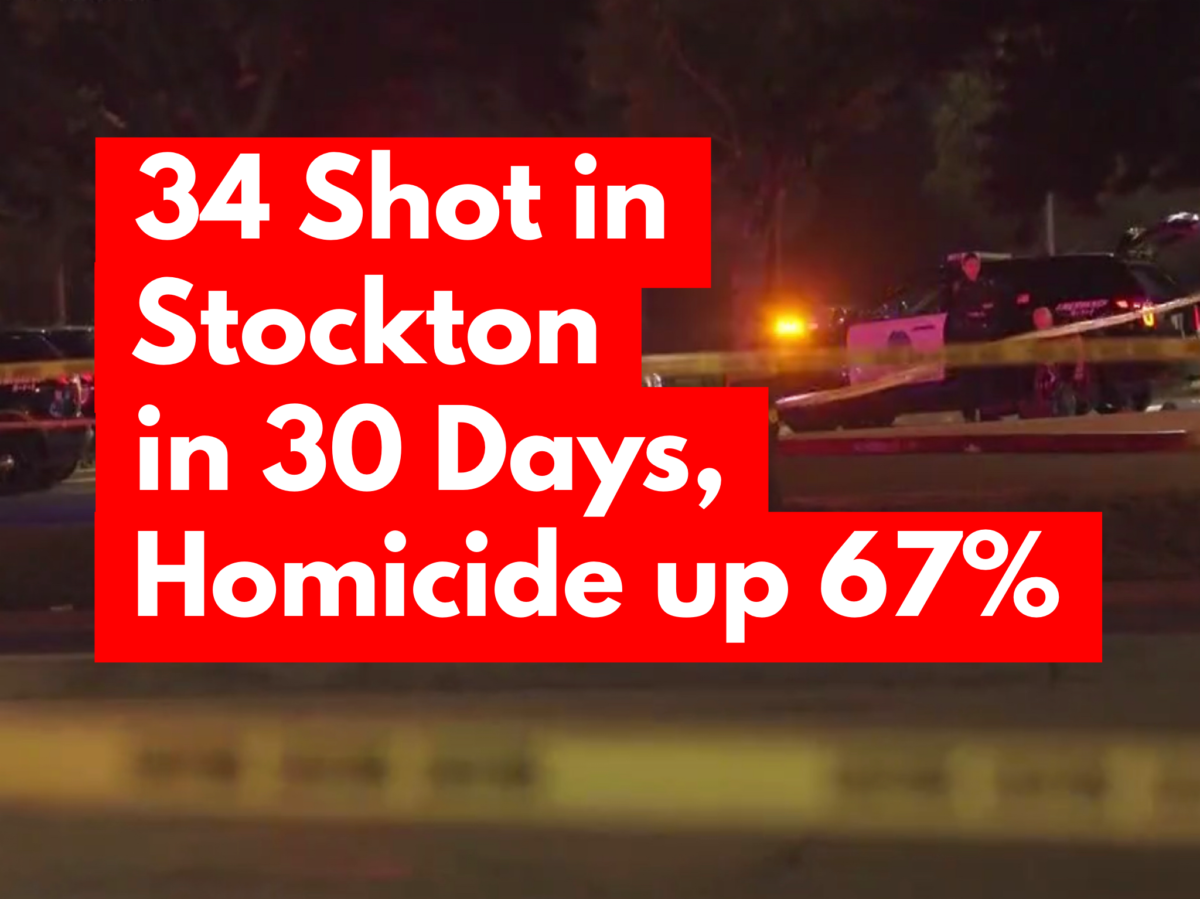 STOCKTON- With violence on a steady uptick since the begging of April, May is starting off even worse. The weekend before last saw 3 people killed in Stockton in as many days. This last weekend proved to be even more violent with 10 people shot, one stabbed, and more shot at. One man was killed in a mass shooting at the memorial for another man who had been killed at the same location just 3 days earlier on March Lane and Holiday Drive. It was the 3rd shooting st that location in as many weeks.

The following are the watch commander reports from Stockton PD highlighting the violence that now has Chief Eric Jones calling for outside help. The homicide rate is up 67% compared to the same point this time last year and 31 people have been shot in the city in the last 31 days. In addition to these incidents, another man is in critical condition after an assault yesterday being investigated by the sheriff’s office as it occurre in an unincorporated area of the city on Auto Avenue in east Stockton :

The adult male victim was asleep in an acquaintance’s living room at an unknown location in Stockton. The victim heard a bang and then felt pain, realizing he had been shot. The victim transported himself to an area hospital for treatment of a non-life-threatening gunshot wound. There is no suspect information.

The adult female victim was in an argument with the suspect about letting her dog out of the house. During the argument, the suspect used a golf club and struck the victim three times. The suspect was located and arrested without incident. ARRESTED: Heather Hodges, 43, for assault with a deadly weapon.

The adult female victim was in an argument with the occupants of a black vehicle. The driver of the vehicle drove away, striking the victim in the process. The victim was transported to an area hospital for treatment of non-life-threatening injuries. There is no suspect information.

The adult female victim was at home when she heard a loud bang. The victim discovered that a window of her residence had been shot out. There is no suspect information.

Officers responded to the report of a person shot at the location. The adult male victim was found to be suffering from a gunshot wound and was transported to an area hospital for treatment of non-life- threatening injuries. SUSPECT: Hispanic male adult, 6’00”, thin, with a long black pony tail and dark clothing.

The adult male victim, a store clerk, attempted to stop two suspects from leaving the store with beer cans that they did not pay for. The suspects struck the victim and one suspect threw a can of beer through a business window, shattering it. The suspects fled in a white newer model Toyota. SUSPECTS: Two Black females in their 30’s.

A traffic stop was conducted on a vehicle being operated by the suspect for unsafe driving behavior, and a loaded firearm was discovered in the vehicle.  ARRESTED:  Rafael Manzo, 24, for traffic and weapons charges.​

Officers were dispatched to the listed area to check for a recently stolen vehicle.  Upon arrival they noticed the suspect crouched adjacent to the vehicle partially behind a dumpster, while holding a gun case.  The suspect was contacted and was found to be in possession of a loaded and concealed firearm.  ARRESTED:  Jairo Rodriguez, 36, for weapons charges and outstanding warrants.​

Officers conducted a traffic stop in the listed area for a vehicle code violation, and subsequently located a loaded firearm inside the vehicle.  ARRESTED:  Corran Grayson, 29, for weapons charges and outstanding warrants.

The four victims were driving through the area when the suspects fired a gun at her vehicle, striking it several times. There were no reported injuries. SUSPECTS: 5 Black males, age 19-20.

Officers were investigating a Shotspotter shots fired call and located the suspect in the driver’s seat of his parked vehicle. The suspect was revving the engine of the vehicle and honking the horn. The officers attempted to detain the suspect and he walked away from the them and attempted to enter the residence. The suspect resisted arrest and a Taser was deployed. The suspect was taken to the ground and handcuffed. ARRESTED: Roberto Villegas, 30, for driving under the influence of alcohol and resisting arrest.

The adult male victim was walking to the store when two suspects approached him and started striking and kicking him. The suspects stole the victim’s property. The victim drove himself to an area hospital for non-life-threatening injuries. SUSPECTS: Two Hispanic males, 20-30 years old.

Officers responded to the report of a person shot at the location. Officers found the adult male victim shot. The victim was transported to an area hospital where he is currently listed in critical condition. SUSPECTS: 5-6 Asian males.

On May 4, 2019, around 11:30 am, Stockton police officers were called to the West Lane area on a report of a man armed with a baseball bat who was acting erratically. Officers located the man on Castle Oaks Drive and Marlboro Court. Officers ordered the man to drop the bat which he did not. The man then advanced in the direction of the officers swinging the bat. At that point, one Stockton police officer fired his firearm striking the man. Medics then transported the man to an area hospital where he is in critical condition. Both the involved officers were ok.

The Stockton Police Department has invoked a County-wide protocol investigation into the shooting with the San Joaquin County District Attorney’s Office and the State Department of Justice.

Suspect: Has not been identified yet. He appears to be an Asian male in his twenties or thirties.

Both of the involved officers have been placed on 3-day paid administrative leave.