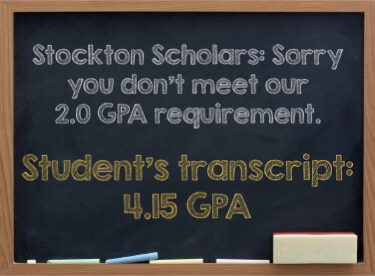 STOCKTON- “Stockton Scholars aims to dramatically increase the number of Stockton students who enter and complete higher education within the next ten years.

We pursue this vision through:
– a place-based, guaranteed scholarship* for Stockton public school kids starting with the class of 2019
– targeted support through the college application process, and
– hosting events and campaigns that build a city-wide college-going culture, including Stockton Scholars Signing Day”.

That’s what the website for Stockton Scholars says is its mission. That’s what a young African American senior at Chavez High School believed was the purpose when she applied. The young student, who wishes to remain unnamed for fear of retaliation from the mayor and school officials, couldn’t help but apply for the scholarship as it had been heavily promoted by school officials, the former interim superintendent and city Councilmember Dan Wright, current superintendent John Deasy, Reinvent Stockton CEO and SUSD board president Lange Luntao, and the mayor himself who made personal visits to the high school which included assemblies that students were forced to attend.

She figured she was a shoe-in for the $1,000 a year scholarship ($4,000 total for a four year university) as she had made the “Mayor’s List” for good grades every year in high school. Her mother Jennifer McKinney explains the surprise and consternation they both felt when they received a rejection email, “My daughter has applied with a 4.15 GPA and just received the email stating she is not eligible because she did not meet a 2.0 requirement”.

When we researched the requirements for the scholarship it says clearly on their website:

“To qualify for the Stockton Scholars grant, students must:

The student’s transcripts clearly show her Grade Point Average exceeds the 2.0 requirement with well over a perfect 4.0. In fact the rejection letter not only states that she was ineligible for having less than a 2.0, but came with the warning that it was the last quarter and she should try as her “last chance” to bring her grades up. Bizarrely her transcripts also clearly show not only were her grades better than the majority of all students, but they were so good she had already graduated early as a result.

Furthermore the email also states that it’s “automatically generated” leading Mrs McKinney to ponder if something else is going on:

“My whole argument with the situation is I believe that Stockton Scholars is a corrupt program. It’s not allowing kids who qualify to apply. I believe they probably have pre-selected kids who were able to receive it. She qualifies, she has made like I said the mayor’s award every year in high school with a 4.0 and above GPA. How is she just a determined student not to be eligible for $1,000 a year measly scholarship when 20 million dollars was donated? It’s ridiculous. Crazy, even a couple other students that my daughter went to school with at Cesar Chavez High School received a denial letter when they had over a 4.0 GPA and my daughter graduated high school an entire semester early. A lot of these kids that are deserving of these scholarships aren’t receiving them and I don’t think that it’s fair especially when the money was donated for Stockton children who graduated from high schools”.

The program clearly had not even bothered to review her application and transcripts or they would have seen both her grade point average and that she had already graduated on the same document.

“They’re getting all the money instead of these students getting the money for school. A thousand dollars a year doesn’t even cover their text books for universities, that’s a joke, but all these people are in his office getting paid. What’s their salary for that? They’re not even making sure that they’re doing a proper job to see the kids who qualify for these scholarships”, said McKinney.

McKinney raises good questions about the nonprofit that Mayor Tubbs has personally promoted and solicited millions of dollars for. Stockton Scholars is run by the Reinvent Stockton Foundation that Tubbs personally founded using his mother’s address where he lived as the organization’s headquarters. It was also listed as the headquarters for his mayoral campaign. Since its founding, the same month Michael Tubbs took office as mayor, it has consistently rejected calls for transparency:

-No one knows what roll Tubbs plays in controlling the organization, but his best friend Lange Luntao was made CEO.

-No one knows how much their salaries are or how much of donations go towards salaries.

-No one knows the true source of the “$20 million” donated, which Tubbs himself admitted to soliciting. An investigation last year revealed it was only $4 million given in 2017, not $20 million despite Tubbs holding up checks of that amount. He’s claimed it would be $4 million a year for 5 years, but as of this article no other amounts declared by Michael Tubbs have been found for 2018 or 2019. According to his statements there should be $12 million dollars in the bank now from the “anonymous donor” who went great lengths to hide their identity, having a third party foundation from Los Angeles be the middle man for the money to be sent to Reinvent. He’s also received $1 million from Alex Spanos and $500,000 from PG&E.

-No one knows how many students have been awarded and of them how many are receiving the $1,000 for a university or $500 for a community college.

What we do know is that while this student was denied a scholarship, Mayor Tubbs personally went on twitter to congratulate another student.

This student also attends Chavez High School, but is not graduating early. The biggest apparent difference is that he worked for Tubbs last summer and as a student trustee for SUSD helped campaign for one of Tubbs’ endorsed candidates to the school board, Candelaria Vargas.

The same Candelaria who is married to Tubbs’ personal assistant Max Vargas. One of her first actions as a newly elected board member was to vote to approve a contract between SUSD and Reinvent Stockton for Stockton Scholars to have access to student data. The SUSD board President Lange Luntao is also the CEO of Reinvent Stockton who will be overseeing that contract and the scholarship program.

The lack of transparency is especially concerning regarding Reinvent Stockton Foundation because it involves so many elected officials, some of which like Tubbs, are using public resources to solicit donations and funding for the organization:

All attempts to seek answers and transparency from the organization and its leaders have gone unanswered for the last two years.

Also of concern with the supposed scholarship is that it says it’s for “Stockton students” yet openly discriminates against students who go to Lincoln, Manteca, or Lodi schools in Stockton. They are required to apply for the “Shiriam Scholars grant” of Stockton Scholars instead. The difference is that instead of only requiring a 2.0 GPA and being able to go to a community college or trade school, those students are required to be accepted into a UC or top private university like USC, which is considerably more difficult.

The acceptance rate for UC’s and those top tier universities are 15-18% for students with an average GPA of 3.73-4.18. That means a student going to Lincoln or Weston Ranch High have to perform twice as good to be eligible, hope they’re one of the 15% that get accepted, and still pay $25,000-$50,000 a year for tuition. The total award for Stockton Scholars is $1,000 a year and it’s being sold by Mayor Tubbs as “covering all costs and tuition”. Just like the transcripts of McKinney’s daughter, he clearly hasn’t read the actual requirements and costs to attend those universities.

For a mayor who campaigned on transparency there has been none involving huge sums of money. And for an organization that purports to promote “Scholars”, something doesn’t seem to be adding up.