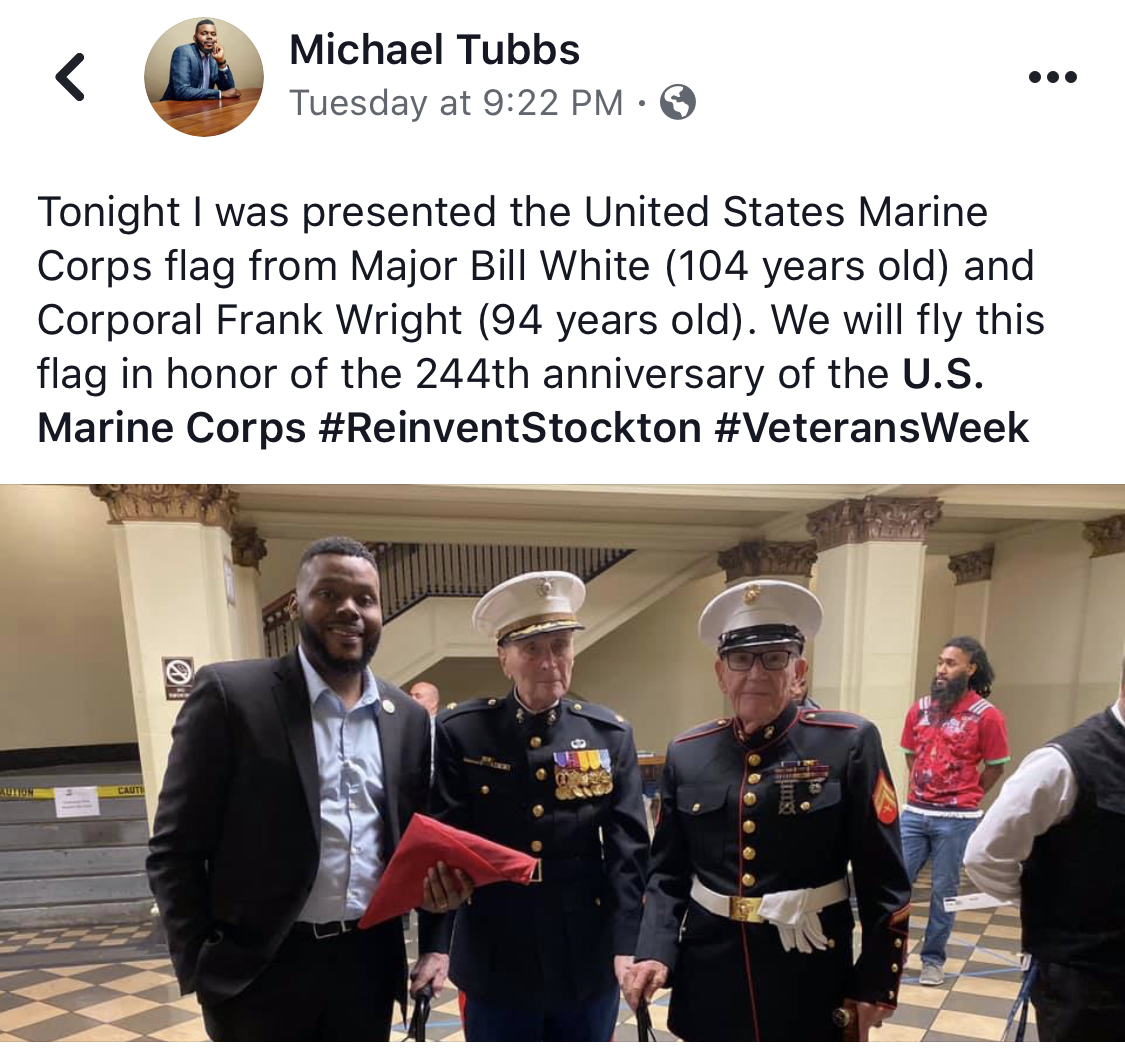 STOCKTON- On November 5, 2019 a group a veterans attended the city council meeting to present the City of Stockton with a Marine Corps flag to be flown in honor of the Marine Corps’ Birthday, which is celebrated November 10th every year. Michael Tubbs, who celebrates being the youngest mayor of a city with 100,000 residents or more, took to social media to post a picture of himself being given a flag by veteran whom included 104 year old Major Bill White and 94 year old Corporal Frank Wright (both retired). His tweet, which was posted against city council policy during a public meeting, gives the impression that he as an individual was given the flag. The real story behind the picture is much different.

An item on the agenda as a consent item 11.3, was to adopt a resolution to fly the flag on the city’s flag pole in honor of the Marine Corps Birthday. A consent item means there is no discussion required and that it is adopted with a majority vote along with all other items on the Consent Agenda at the beginning of the meeting. The way such events would normally work is that the resolution is passed on Consent, then those in attendance from the public would be able to speak and present the flag to the city council immediately after on the next agenda item which would normally be Public Comments. After Public Comments then, after receiving community input, the council would proceed with New Business. Michael Tubbs is well aware of this, not only because he’s been mayor for three years, but because he was a councilmember for four years prior to that. This is routine.

However, Tubbs upon becoming mayor changed public comments to the last agenda item at the end of the meeting instead of the beginning. He did this March 3, 2017 shortly after taking office as mayor as a way to discourage public input and participation in reaction to members of the public showing up to meetings to criticize his decisions, behavior, and leadership. Instead of submitting a card to speak at the beginning of a meeting at 5:30pm, now members of the public were forced to wait up to 5 hours to be able to speak. Those who were disabled or students began to immediately be absent from meetings as a results. Activists critiquing him, who were the target of his policy change, still show up despite his efforts to stifle their voices.

The meeting on November 5th lasted over four hours. After the two hour mark, the veterans including White and Wright began to leave as the council discussed issues like homelessness which has increased 200% during Tubbs’ mayorship. Many of them left upset according to our correspondent present at the meeting. Seeing that the veterans were exiting, Michael Tubbs left the dais to catch them outside the council chambers and take pictures while taking the flag to be flown without any public recognition, acknowledgement or ceremony for the veterans and significance of the resolution whatsoever. This is evidence by the picture which shows the Marines are outside of council chambers in the lobby near the elevators. Instead of providing the veterans, with a combined age of 198 years, with the dignified recognition they warrant, Tubbs had his assistant snap two pictures as he blocked their path to the elevators ( as evidenced by the angle and location of the picture, which shows the Marines standing directly in front of the elevators facing the doors ready to board with their walker and cane) and posted that the flag was for him. It wasn’t. It was to be flown from the 7th to the 12th.

Today, the 12th, we checked the flag pole before close of business at city hall at 3:30pm. It was not there.

Michael Tubbs is up for re-election March 3, 2020, almost four years to the day since making the decision to change public comments to the end of the meeting.