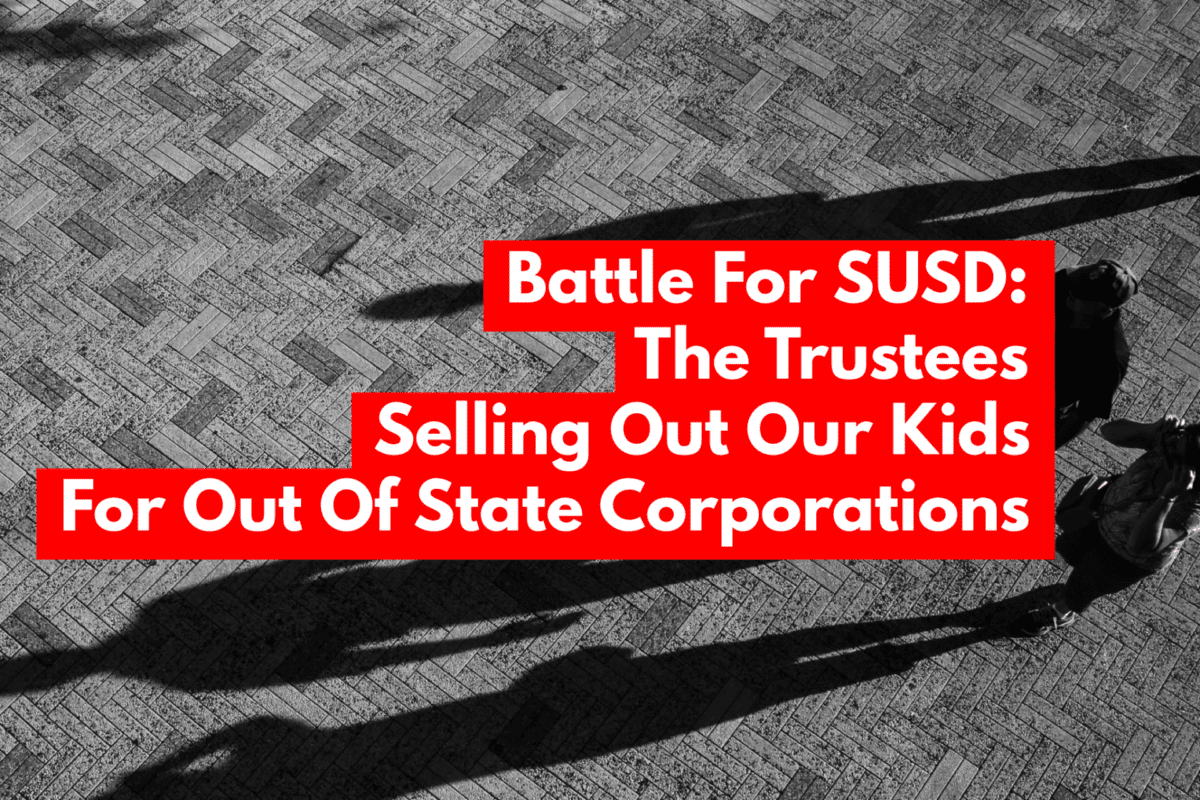 Local school districts elect local community members who live in those districts to make decisions for the district, its employees, and its students and parents. The emphasis of course is locally since the elected representatives are supposed to be the voice of their communities. Normally. However, in the case of three board members on the governing board for Stockton’s largest school district the truth is they have been compromised and are under the influence of outside and out of state interests by a network of individuals that seek to exert outside control on the Stockton Unified School District.

To accurately paint a picture of this network, we must understand the relationships and employment that these SUSD Board Members hold.

All three of these SUSD Trustees are not only part of the “Reinvent” network, but are also members of an organization called School Board Partners that are seeking to push a Wall Street inspired “Portfolio” model of big corporate charter schools under the guise of “reform”, in “urban” cities across America including Stockton.

“School Board Partners says it wants to create a ‘national community’ of board members and will offer coaching and consulting services. Emails obtained by Chalkbeat indicate the group is targeting board members in Atlanta, Baton Rouge, Denver, Detroit, Indianapolis, Los Angeles, Memphis, New Orleans, Oakland, and Stockton”.

The Puppet Master Behind John Deasy

Another significant player is Mr. Don Shalvey, who was previously a long time director of Aspire Charter Schools (one of the three schools that is looking to expand in Stockton), and who just left his most recent post as Gates Foundation Deputy Director of Education Programs, to lead the A+ non-profit organization in Stockton, which supports the expansion of Charter Schools, which is also part of the focus of the Gates Foundation as part of their vision of “school reform”.

Former SUSD Superintendent John Deasy, who was known for his anti public schools and union/pro privatized charter school agenda during his tenure in Los Angeles Unified, reported to a defacto authority, Mr. Don Shalvey of the Gates Foundation, rather than the Stockton Unified School District Board of Trustees, which is clearly reflected in emails obtained by 209 Times through CPRA requests.

It’s apparent from these emails that Deasy was receiving direction and guidance from Shalvey, on an ongoing basis and without the knowledge of most SUSD Board Members. In fact, an SUSD Staff Member sent an email expressing frustration that Charters were coming to the District to request a CEQUA waiver from the district, as a result of Shalvey’s lobbying around the city.  Specifically, a Charter had contacted the District, as directed by  Mayor Tubbs’ office, to request a CEQUA exemption for Charter facilities from SUSD.

It was clear to this staff member that these attempted short cuts were a direct result of Shalvey’s messaging and the staff member expressed that point.

When that email was forwarded to Superintendent Deasy, he forwarded it to Mr. Shalvey, and simply asked “Thoughts?”, obviously requesting guidance on how to handle the matter that was reporting concerns about him.

A signifcant exchange occurs when Deasy forwards an email to Shalvey, asking for “thoughts”, regarding an email Deasy received from Board member Maria Mendez alleging that something is “fishy” about the Housing Justice resolution that was resurrected and placed on the agenda without anyone’s request, that she is aware of – she presents 3 questions to nail down the issue, and threatens to go to the media if Deasy insists on placing this resolution again on the agenda, without Board member request.

Board Member Mendez, in which she states that her anger has peaked, and she is considering going before the city council to demand that they stop making this district a charter target, because increased charters will drive down wages.

Mr. Shalvey’s close relationship with both Mr. Deasy and Mr. Howard was not hidden in their communications, as they discussed the planning of fancy limousine trips together, along with their wives, to see shows like Hamilton.  Mr. Nic Howard, who hails from Teach For America (another member organization of this outside network), is described in these very emails as a private organization that benefits from Wealthy Funders and as such, people posture to obtain high level positions through associations and friendships with these wealthy people.

What was hidden from the SUSD Board Members was the intimate relationship and secret communications the Superintendent had with Mr. Shalvey and his associates, which led to the fast-tracking of 6 Charter School petitions in SUSD, which were all amazingly approved via Consent Agenda- eliminating any discussion or input from the public. This was a move that was unprecedented in American history.

Unbeknownst to the Trustees who aren’t a part of this network of Reinvent Stockton employees (of which Board Member Lang Luntao is), the Gates Foundation (Don Shalvey), or  Charter Management Organizations like Aspire (of which Trustee AngelAnn Flores is an employee of) sought to fast track these 6 expansion Charter School petitions through SUSD, even while new legislation was being passed at the State Capitol in Sacramento to create increased transparency and governance over the charter school process.  This was a 4th quarter Hail Mary operation to expand as much and as quickly as possible before those state laws would take effect.

In retaliation for the majority of the SUSD trustees who held Deasy accountable, leading to his untimely resignation in lieu of impending termination, a Recall Campaign has been organized by paid “activists” and financially compensated “community partners” under another fake shell organization called Parents for a Better School Board. This is also connected to this same “Reinvent” network backed by outside interests.

Ironically, people like Nancy Huante, who is another operative of Reinvent Stockton, and other associates of their cabal are now pushing to recall these Trustees who are standing up to this plot by outside influences trying to infiltrate SUSD. They cry wolf and make slanderous charges about racism everything they can think of toward other Trustees who are themselves people of color for accepting the resignation of a privileged White superintendent instead of responding to the issues that have led to this fiasco and putting the best interests of students first.

A small but well financed group of individuals backed by out of state interests believes they can take control of the board away from the community and place it in their hands. They are wrong.

It’s clear Mayor Tubbs’ priority is SUSD, not the city issues he was elected to address. But that’s Part 3.