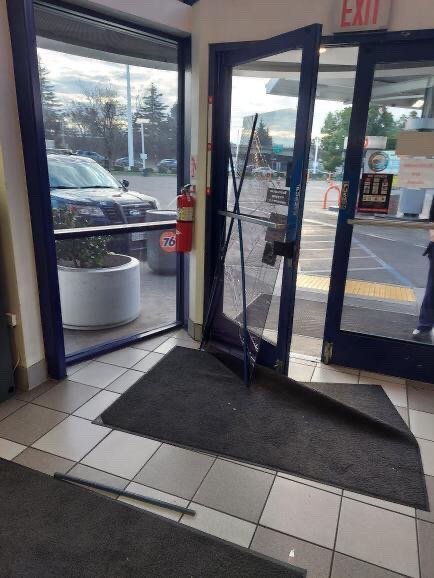 This morning at 7:30am a mother of 6 was working at this 76 on March Lane and I-5. A homeless transient was outside harassing customers so she started calling 9-1-1 on her cell phone. The transient then broke through the locked doors by throwing his body against the glass until he breached the store. According to the woman he then began to beat her, smashing her head on the ground repeatedly until a woman and some construction workers rushed in to save her. The transient then ran off with the cell phone and was arrested nearby. The worker who was attacked is now in the hospital awaiting another CAT Scan as bleeding has been found in her skull.

This morning, at 7:22 a.m., a 41-year-old female victim was working at a business in the 2700 block of West March Lane and confronted the suspect who was harassing customers. The suspect then forced his way into the locked business by kicking in the glass doors. He then severely beat the victim, took her property, and tried to flee. Several people in the area held down the suspect until police could arrive and take him into custody. The victim was transported to an area hospital for treatment of non-life-threatening injuries. Arrested was Robert Davis, 30, for robbery and burglary. Davis was booked into the San Joaquin County Jail.

The Stockton Police Department would like to thank the community members who helped detain the suspect after this violent attack. By working together, we are making difference”.