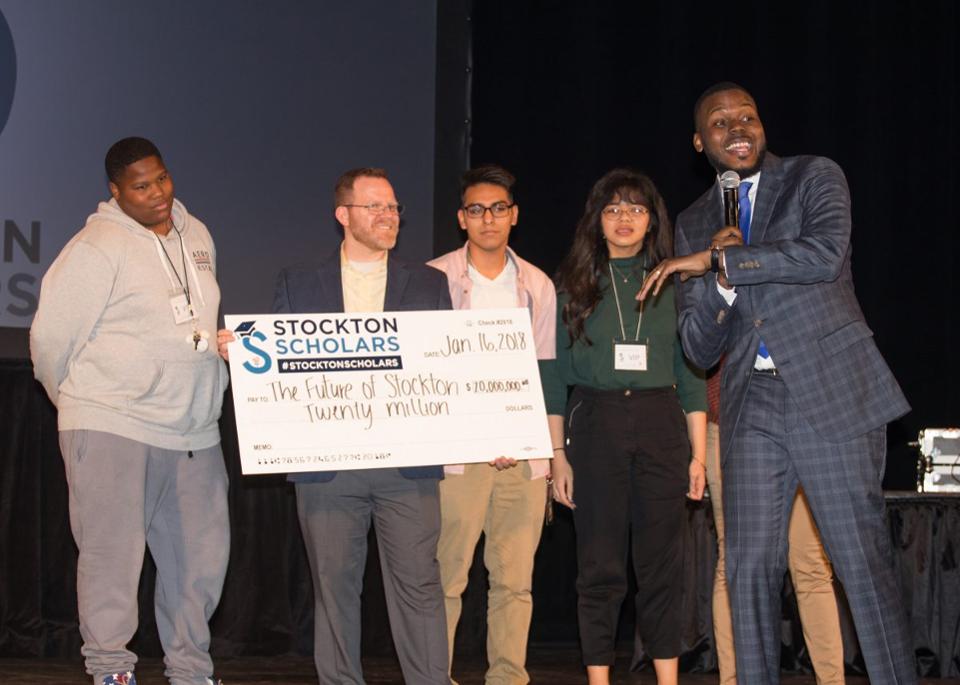 Stockton- After failing to be passed last November, a proposed contract between Stockton Unified School District and Reinvent Stockton Foundation is back on the agenda for today’s board meeting. This move is undoubtedly the result of two of Mayor Michael Tubbs’ endorsed candidates getting elected to the board in November and now being in a position to vote in favor of the contract.

What’s also changed since last November is that Lange Luntao is now board President. Luntao wears many hats, he is not only Michael Tubbs’ best friend and an elected official as SUSD board of trustees President, but happens to also be the CEO of Reinvent Stockton Foundation.

Reinvent Stockton Foundation controls “Stockton Scholars”, which is a scholarship that is now clear to see from the proposed contract why it favors SUSD students to the exclusion of students of other school districts. Stockton has four public school districts. That reason being is that they want access to student records and data. What would be the need to have access to such data in order for students to receive $500/$1,000 scholarships when all a student has to do is apply for the scholarship without any contract between SUSD and RSS whatsoever? Why else would it be needed other than to farm private data that Reinvent can then use to profit from by applying for more grants for their listed 7 employees including Luntao?

That’s our best guess, but no one really knows because Reinvent has no transparency. A year later both Tubbs and Luntao refuse to disclose the source of a claimed $20,000,000 donation their organization received. That is highly unusual for a nonprofit organization only a year old with nothing more to offer in regards to results and a track record other than the fact that two of their captains control votes on both the Stockton city council and SUSD school board. Tubbs has gone on record to state the California Community Foundation, whose mission is to help the Los Angeles area, gave Reinvent the $20,000,000, which is to be delivered at $4 million a year for five years. Tubbs and Luntao deny any additional source for the money, which is in stark contradiction to the fact that the California Community Foundation has admitted that money came from a donor whose identity they will not reveal-to earmark for Reinvent in Stockton. Both have literally been caught in a lie, but now they’re asking for SUSD parents’ trust that they will not misuse the private date of their students.

While Tubbs has tried to hide the role he plays in the buisness and decisions of Reinvent Stockton Foundation by using the “office of the mayor” to give the impression it’s an independent “partnership” the facts remain that per Stockton’s city charter the mayor is only ceremonial and has no authority to enter into any partnerships or contracts. Only the city manager has that authority. Yet Tubbs has admitted on social media that he’s used his high prices assistants, funded by tax payers and on city salary, to solicit such funding that has gone to his nonprofit. He deleted that comment shortly after making it. In fact all of the “programs” Tubbs has traveled the country making paid speeches about are all through his nonprofit Reinvent Stockton Foundation and not part of city buisness at all.

To date he has solicited millions for Reinvent Stockton Foundation. An unsuspecting onlooker could say it’s just a coincidence that the name of his foundation and his political campaign slogan are the same, except for the fact that Michael Tubbs himself incorporated Reinvent Stockton Foundation the very month he took office as mayor. He even used his own personal address for the buisness’ address, which also happened to be the address for his political campaign.

Something stinks in Stockton and it’s not just the water in the channel downtown. SUSD trustees would do right to vote against this contract. Oh did we mention that one of the new SUSD trustees voting is the wife of his personal assistant? Candelaria Vargas’ husband, Max Vargas’ job literally is at the will of Michael Tubbs. How do you think she’ll vote.

The contract states Reinvent is continuing to solicit funding and also that Luntao will use no influence over any decisions on the matter. However, we were tipped off and sounded the alarm last fall that Luntao was trying to pressure Lincoln Unified officials into showing up at the Stockton city council meeting to publicly support Tubbs’ plan to have a sales tax be placed on cannabis sales so proceeds could be directed to Reinvent Stockton Foundation. According to the official we spoke to, if they did they were promised that Lincoln students would also be included to apply for Stockton Scholarships, but they would need that money from cannabis in order to afford it.

It’s time the grand jury step up and do its job. Below is a copy of the proposed contract: