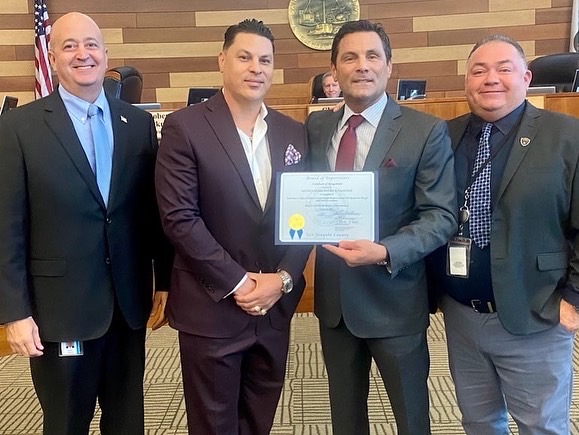 Today the San Joaquin County Board of Supervisors recognized Motecuzoma Patrick Sanchez and Patricia Alvarez for their efforts to help a Lathrop resident and Vietnam Veteran in distress.

The Veteran reached out to 209 Times for assistance as a resource he trusted instead of going through law enforcement he feared may not have treated him well since it involved firearms.

Alvarez, who has an extensive background in working in social services vetted the legitimacy of the request and notified other staff of 209 Times. Since a Veteran was involved, Sanchez who is a Marine Corps Veteran himself, was notified of the severity of the situation and he went out of his way to personally coordinate a successful resolution while communicating directly with Sheriff Patrick Withrow and arriving on the scene to be there for the Veteran personally as Sheriff Deputies arrived to assist.

The situation exemplified the resource 209 Times, which was created by Sanchez, has become for the community and value it serves beyond news and investigative information.

Supervisor Kathy Miller, however, chose to use the dais to cause a scene, drawing attention to herself as she had an emotional outburst and mental breakdown proclaiming that the Certificate was “not real” before physically leaving the chambers shocking the audience in attendance. Her losing her election to the State Assembly to 209 Times’ endorsed candidate Carlos Villapudua surely played a role.

“I’m glad that my team could bring about a successful resolution and I thank the fellow Veteran for being brave enough to reach out for help. I also thank the professionalism of the Sheriff and his deputies. As far as Kathy Miller, I’m here for her too if she ever needs to reach out”, said Sanchez.