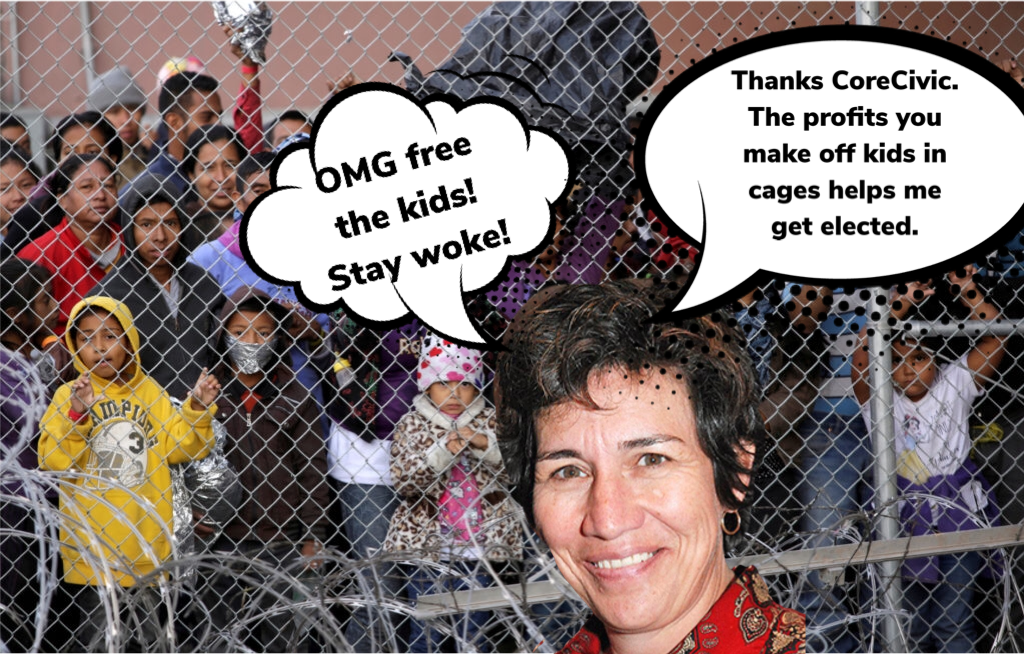 Susan Colette Eggman has been in office over a decade now. During that time she has proven consistently to be anti-Mexican in both attitude and actions. Her legislative record has only confirmed this assertion. From the time she was a Stockton City Councilmember she had an opportunity as the only “latina” on the dais to stand up for the Mexican community when cities across the nation were making a statement to condemn racist and anti-Mexican Arizona law SB1070 was a national issue. Dozens of Mexican activists and community members requested the city council to pass a resolution similar to Sacramento, SF, LA, and cities across America condemning the law that would have made it legal to profile anyone who “looked” like their citizenship could be in question and demand they provide identification proving they were US citizens. As the only “latina” elected official on the city council it was Eggman, who uses the false alias of “Talamantes” Eggman during election seasons, that rejected the request.

After using her alias of Talamantes, when in fact her legal name and name she’s paid by the state of California is Susan Colette Eggman, pandered to the same population she turned her back on to get elected to the state assembly, her anti- Mexican sentiment continued.

In 2016 when the United Farmworkers union, founded by Cesar Chavez and Dolores Huerta, was pushing to end an 80 year old law rooted in racism and discrimination against African Americans and Mexican migrant field workers not receiving overtime pay after 8 hours of work like every other worker in America, again it was Eggman who not only refused to vote in favor of the bill, but according to UFW staffers was actively working against it to get other democrats to also stay off of supporting the bill with a Yes vote. As a result the bill failed and had to brought back up several times before finally passing WITHOUT her vote.

And now it’s been discovered that while she has the audacity to show up to rallies condemning immigration policies and detention centers, using the plight of children being separated from their parents for political grandstanding opportunities, she has been taking thousands of dollars in campaign contributions from CoreCivic.

CoreCivic is the largest and worst corporation in the nation that operates the same ICE detention centers Eggman condemns in public. They are a private company and operate said facilities for a profit, literally profiting off the misery of the same children and their parents that Eggman speaks at “Keep Families Together” rallies. It doesn’t get more hypocritical than that!

Not only is CoreCivic the largest, they are the most oppressive with multiple lawsuits for civil and human rights violations including abuses that have led to immigrant detainee deaths. They have already been fined millions of dollars in previous lawsuits and have a record of abuses so bad that they even changed their original name of Corrections Corporation of America as an attempt to distance themselves from their own record.

And this is who the Stockton Mexican American Hall of Fame chooses to honor by inducting into their “hall of fame”? They dishonor themselves and the Mexican community they purport to represent by doing so and honoring such a dishonorable opportunistic hypocrite. They prove to be a hall of shame with the induction of someone so consistently anti-Mexican as Susan Colette Eggman has proven consistently to be. Shame on you. Pinches sin vergüenzas.