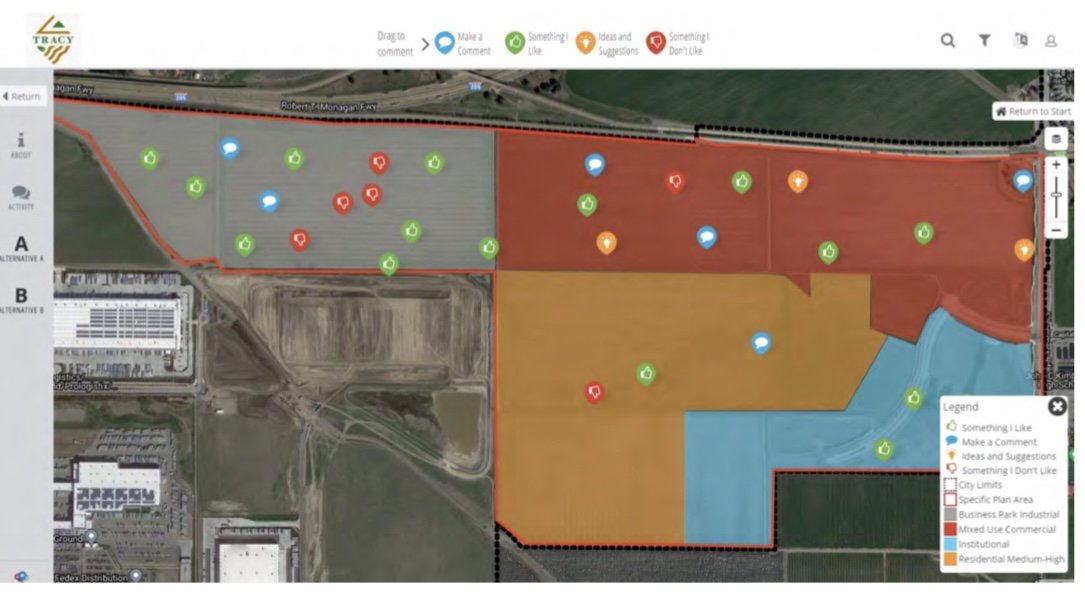 TRACY- After years of development, the plan for development in the city’s “panhandle” along the 205 has hit yet another pause. With a 2-2 vote on a 5 member city council, approving the plan for development has been tabled for a later date. The would be tie breaker, Councilmember Veronica Vargas, recused herself citing a conflict of interest since one of her out of town business clients, Patterson Petroleum, LLC, owns land in the area being voted on, Lammer Rd and 11th St.

According to the firm tasked with surveying the community:

“City of Tracy is preparing a Specific Plan for the 536-acre Westside site (the Plan Area), located in western Tracy. A previous Tracy Gateway General Plan Amendment and Concept Development Plan was originally approved along with annexation to the City in 2002. However, due to challenging market conditions, requirements related to scope and phasing of infrastructure, economic feasibility and other factors, development of the Tracy Gateway Project did not occur.

The City has been working with property owners to reanalyze and reimagine the Plan Area and facilitate implementation of a new, and feasible, development project. If adopted, the Westside Specific Plan would establish a planning framework for the future development of a mixture of uses including commercial, retail, medical, institutional, and residential uses.

In response to City Council direction in March 2019, the City began preparing a Specific Plan (which included a draft land use plan) and an Environmental Impact Report (EIR). In late 2020, property owners provided feedback on the City’s preliminary draft Specific Plan and expressed a preference to redesignate approximately 180 acres of the Plan Area from institutional and assisted living to either industrial or residential land uses. The property owners presented two alternatives to the draft land use plan.

In April of 2021, the City Council directed staff to reach out to the community to obtain community feedback on these two alternatives as well as receive general comments about the project”.

The process they followed was described as such:

These were the results of the community survey:

While there has been contention from community interests groups about building industrial zoned structures in the area, this was the result from the community survey when posed with three alternatives:

The majority of those surveyed chose Alternative A, Business Park Industrial.

Much of the crux of the opposition to industrial development is the resistance to warehouses. However, the industrial sector currently generates an estimated $33,000,0000 – $34,000,000 in sales tax to the City of Tracy General Fund, roughly 30% overall.

The City estimates a surplus of $62,000,000 after full employment of all open positions, or roughly 10% of the city’s overall workforce.

The average salary of a warehouse worker according to Labor Statistics for the region is approximately $60,000 a year or $120,000 for two earner in a household. The median household income in Tracy is $92,000 based on the latest US Census data.

In regards to the education level, 51% of industrial workers in Tracy currently have attended or graduated from a college and have post-graduate degree.