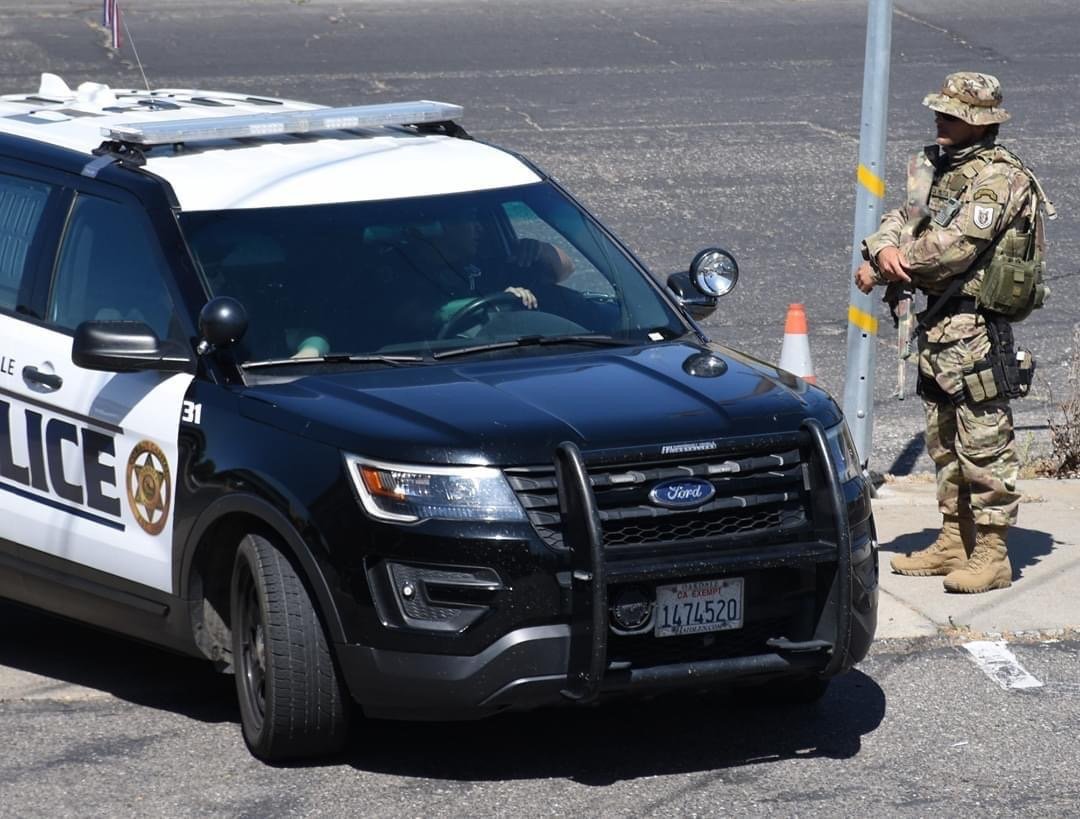 OAKDALE- A group of rejects calling themselves the “California State Militia-2nd Regiment” and dressed in mismatched uniforms (some too small for the ones failing the “military appearance” weight requirements of the real military) invaded the two blocks of 8 stores known as “downtown” yesterday armed with rifles and pistols, that may or may not have been loaded. We don’t know if they were loaded (rifles without magazines can still have rounds in the chamber) because Oakdale Police officers didn’t even bother to check…or arrest them for misdemeanors as California is not an Open Carry State (thanks to the Black Panthers).

It is illegal to openly carry a rifle or pistol in California. “California law now generally prohibits any person from carrying an exposed and unloaded handgun upon his or her person outside of a vehicle in a public place.4 This prohibition is subject to a number of exceptions, including for peace officers, military personnel, licensed hunters, and the carrying of an unloaded handgun in a locked container.5 The violation of this law is a misdemeanor in most cases.6

California law also prohibits the carrying in public, outside of a vehicle and on or about one’s person, of an unloaded long gun in any incorporated city or county, or within any prohibited areas in unincorporated regions of a county.7 This is subject to several exceptions similar to those that apply to the open carrying of handguns in public, including exceptions for peace officers, licensed hunters, and military personnel.8 The violation of this law is a misdemeanor in most cases.9”

Despite this fact, police allowed them to operate in public posting on street corners and rooftops. They were even so bold as to post photos of themselves on their Facebook page although they did not disclose the town where even the police badge is emblazoned with the slogan “Cowboy Capitol”.

This blatant show of force as an obvious means to intimidate Police Accountability/ Black Lives Matter protestors from legally exercising their 1st Amendment rights comes just days after a peaceful protest was declared an “unlawful assembly” after an Oakdale resident named Nick Gonzales attacked a man driving by in a convertible.

Once again in full view of police who then inexplicably fired off flask bang grenades in the air they referred to as a “sound distraction device”.

Interestingly enough, police did not declare it an “unlawful assembly” when the counter protestors, who were posting violent racist threats on the All Things Oakdale (California) Facebook group days leading up to the protest, were drinking in public in full view of them. I’m fact we are not aware of a single citation or arrest being made for any of the guns, alcohol, or terrorist threats P.C. 422.

UPDATE: The Oakdale Police Department has offered an excuse that is clearly dispelled by the photos in this article.