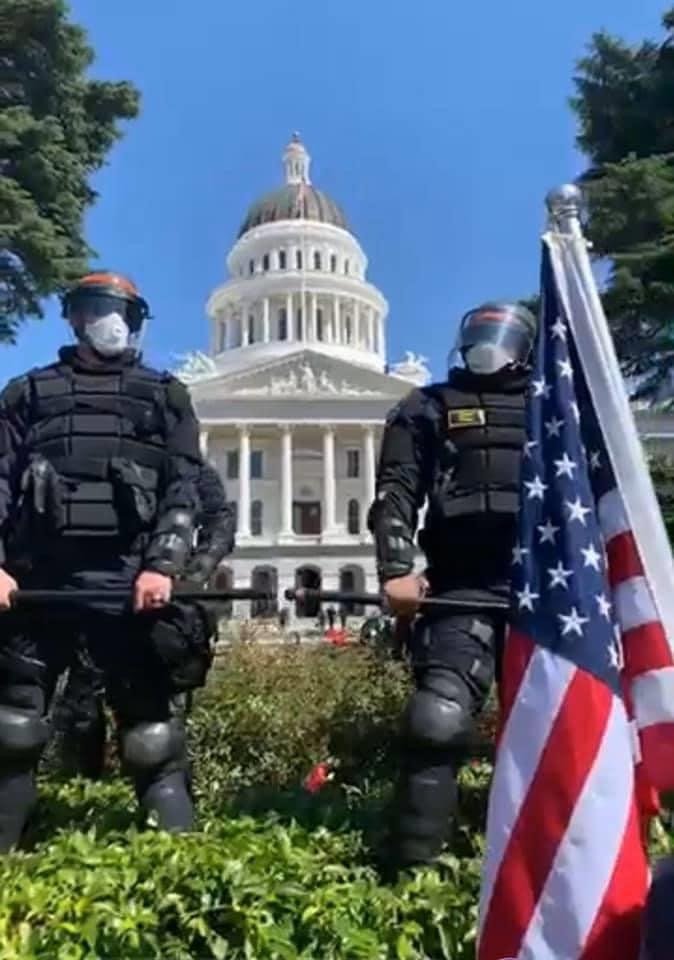 SACRAMENTO- Yesterday Several hundred people gathered at the state Capitol building to protest the Shelter In Place orders put in place to stop the spread of COVID-19, coronavirus. Unlike similar protests at Capitol buildings in other states including ones where participants showed up with rifles and body armour, the one in Sacramento ended with a physical crackdown and multiple arrests, including a woman from Stockton, Denise Marie, known for her stance against mandatory vaccines.

Ironically they were arrested for “endangering public health” by not observing the order nor social distancing or wearing masks…by police who themselves were not practicing those same standards. The following is a 1st hand account by a woman named Beth. While her views are not ours, her account provides a perspective about how teh event turned out and how California Governor Gavin Newsom, who promotes himself as progressive, is handling the situation in our state :

“Yesterday is a day I will never forget. There were probably a couple thousand people there. Hundreds gathered on the steps of the capitol. Police formed a line at the front and told us to disperse. Before long they moved the line forward and started pushing people off the steps with batons. A few scuffles erupted but the crowd was so thick I didn’t realize 14 people had been arrested on the other side, including a 15 year-old girl and her mother. At this time, the protest organizers (three women who have organized many protests there and have a longstanding relationship with the police) were singled out and violently dragged away. They had been stuck between a man in a wheelchair cart and the police line. They were pulled out so fast and taken behind the line and into the capitol, I was 20 feet away and didn’t see it. They were not read their rights and were denied their phone call.

The original line was Sacramento PD. None of them wore masks or gloves. Some of them wore sunglasses. We talked to them and told them we are not the enemy. I told them I am a mother. We repeatedly made eye contact. We were emotional. Some of them were emotional too. Emotions ran the gamut. Sometimes we yelled at them and sometimes we thanked them for their service. Sometimes they responded to us and sometimes they didn’t. The crowd chanted, “Officer, officer, remember your oath,” and “You represent us!” After they had pushed the crowd off the steps, cops on horseback rode in from the side and the original line fell back and was replaced by CHP in riot gear. HUNDREDS of them poured out of the capitol like hornets. They flanked us on three sides.

After every escalation there was a lu Koop i ll; adrenaline spikes and valleys. My friend went up to one of the CHP officers, the only female cop, and asked her if they were going to gas us, because there were kids there. She said they hadn’t gotten any orders about tear gas, but if she heard anything she would let my friend know so we could get the kids out. Shortly after that she became emotional, broke formation and disappeared behind the line. It was a lot harder to feel the humanity of the cops in riot gear. It felt harder for them to feel their humanity too. I stayed with my friends and tried to stay a few people deep because it was not my intent to get arrested.

Eventually, they gave final orders that we were violating a public health order and to disperse to city streets, and started pushing the crowd back. My friend and I stayed while the rest of our group left the fray. Up at the front were several parents holding children in their arms, screaming and being pushed by batons. The man in the wheelchair cart was getting pushed and I was concerned he would fall off the second set of stairs. Someone with a PA played Get up, Stand Up as they slowly pushed us back.

When they had pushed everyone back onto the grass, my friend and I bailed and went to lie down under one of the giant trees. We were exhausted physically and emotionally from hours of facing off with cops in the hot sun. I was dizzy and shaky and the Earth felt so good, I felt stuck to the ground. I didn’t even really register that the line of cops was hundreds long, extending across the whole capitol grounds, the whole city block. As we lay there drinking in the Earth, they encroached on us. We finally sat up when they were a couple feet away, and they said they’d have to arrest us if we didn’t move. We looked at each other for a long time. We were so tired of fighting and being pushed back and pushed back away from our public state capitol. My body felt glued to the ground. We sat there cross-legged and talked to the cops. They had their visors up and one of them took his mask down to talk to us. I asked him if he had kids; told him I’m a mother. His voice cracked as he told me he hadn’t seen his son in six weeks. I said, I don’t want to be here, but I have to be. I think you feel the same way. He said yes. I said I hope you never forget this day, and he looked me right in the eye and said, I won’t. They practically pleaded with us to get up and move. People around us were crying, I could hear my fierce mama friend yelling, and we were starting to cry as the adrenaline of the day came rushing out of us. We finally agreed to stand up but as we stood we both lost it and grabbed each other in an embrace, sobbing and shaking. The cops kept advancing and were almost forming a huddle around us. One practically whispered, ma’am, please move back, just five feet for now. As I could feel him at my back, we stumbled off and I found a bench and put my head down and sobbed as I thought of my kids. My friend’s older child was with us, and he was sobbing in fear and confusion.

I have never in my life seen so many police so emotional and wavering in their position so much. Truly, none of us wanted to be there and I don’t think any of us will ever forget the experience. Yesterday we were barred en masse, by a tyrannical governor, from exercising our first amendment right to peaceably assemble at our state’s highest public town square. The constitution trumps all other laws, and all laws trump health orders. There was no violence, just mothers, fathers, grandmothers, and regular people of all ages, races, political stripes and faiths who want to get back to work. A group of nurses were let off work early from an empty hospital and joined us.

We have flattened the curve and it’s time to stop cowering in fear and learn how to coexist with this virus. I understand emotions are high on all sides of this global issue and I respect that. If you can’t understand the gravitas of this moment and of losing these rights, or if you think I am wrong for protesting, I have no resentment towards you, but please feel free to walk away and unfriend me now, because I do not have the energy to squabble with you when there is something much, much bigger at stake, which is our very ability to be free people. Lefties, please stop erasing people’s experience by saying this is about white privilege. Yesterday I watched two black men standing in front of me pat each other on the back and say to each other, “ We’re here, brotha, we’re here!” I believe it’s early days. Things will likely get a lot harder ahead. We are going to need each other. We are going to need to be bigger than our differences.”