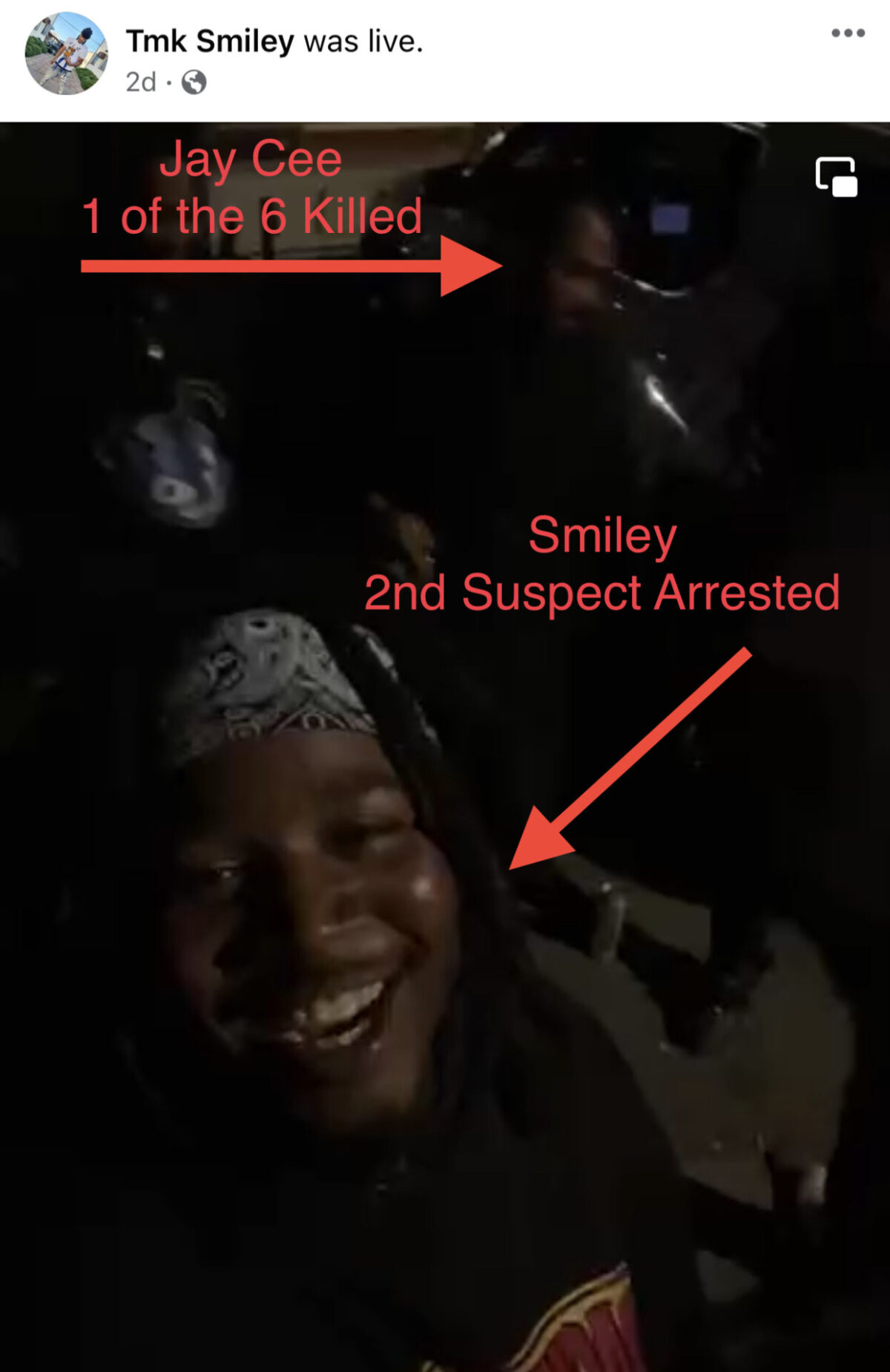 SACRAMENTO- Video posted on Facebook live by Smiley right before going to Midtown. This video was posted at 9:45pm on April 2, 2022 hours before the largest mass shooting in Sacramento history. Both suspects arrested to date are in this video including the host. JC aka Joshua Hoye-Lucchesi, one of the 6 homicide victims is also in this video. According to a Facebook post by Dandrea Martin hours after the shooting he was also shot, making the total number of people shot 19 instead of the reported 18.

Sac PD released the following statement regarding the arrest of Martin this morning:

“On April 3, 2022, Sacramento Police Department officers responded to the sound of shots fired in the area of 10th Street and K Street.  Officers located multiple gunshot victims and began rendering life-saving measures.  Despite these efforts, six victims were pronounced deceased at the scene. Twelve other victims with varying degrees of injuries from gunfire were also located. At least three buildings and three vehicles were damaged by gunfire.

Homicide detectives and crime scene investigators have worked continuously since this incident happened to investigate this crime. Detectives have located hundreds of items of evidence at the scene, including over 100 expended shell casings, and a stolen handgun which has now been inspected and found to have been converted to a weapon capable of automatic gunfire.

During this investigation, Sacramento Police Department SWAT officers and detectives developed additional information and served search warrants at three residences in the Sacramento area resulting in the seizure of a handgun.

Detectives identified 26-year-old Dandrae Martin as a suspect in this shooting. On April 4, 2022, Martin was arrested and booked in the Sacramento Main Jail for assault with a firearm and for being a prohibited person in possession of a firearm.

A second suspect has now been identified in this incident. 27-year-old Smiley Martin was located at the scene with serious injuries from gunfire and was transported to an area hospital for treatment. Smiley Martin was quickly identified as a person of interest and has remained under the supervision of an officer at the hospital while his treatment continues. Based on information developed during this investigation, Smiley Martin was taken into custody by Sacramento Police Department detectives on April 5, 2022.

Once Smiley Martin’s medical care has been completed and he is determined to be fit for incarceration, he will be booked at the Sacramento County Main Jail for possession of a firearm by a prohibited person and possession of a machine gun”.

Jay Cee aka Joshu Hoye Luchessi, one of the six killed during the shoot out can also been seen on the live feed pointing a Glock with an extended magazine that can be altered to shoot fully automatic as heard during the shooting. Sources report that half or 3 of the 6 killed were involved in the mass shooting.