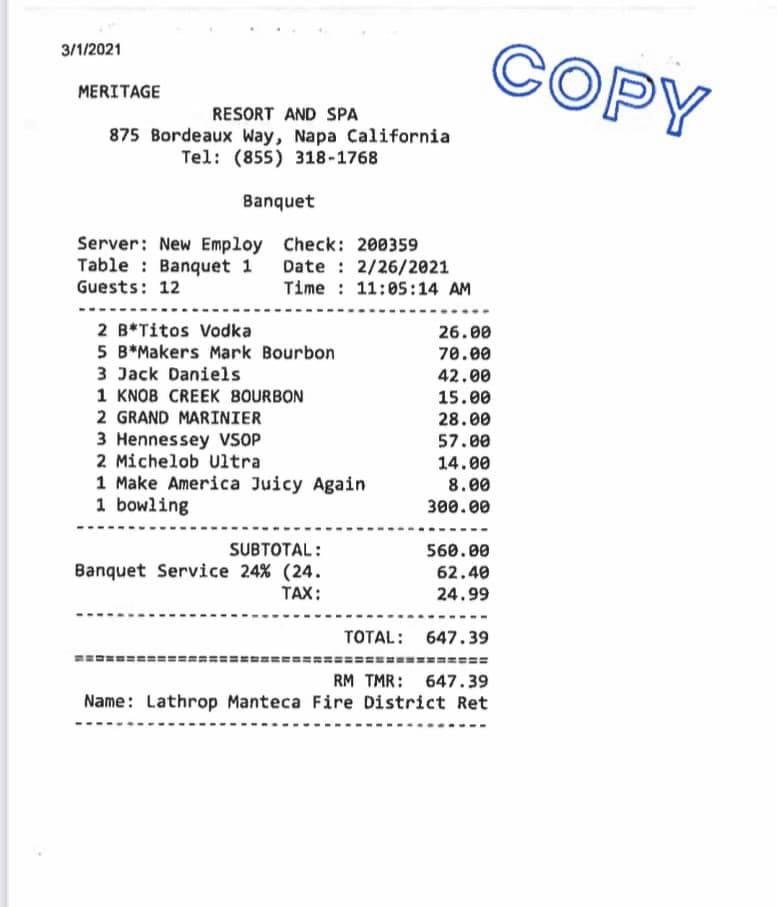 A 209 Times exclusive investigation has discovered Meritage Napa Hotel room stays between February 24-28, 2021, massages, facials, and numerous alcoholic bar drinks including Crown Royals, Maker’s Mark and Well Made Vodka, were initially placed on a “Cal Card” and then later paid via a “Cal-JAC” reimbursement. The entire bill exceeded $25,000.

A customer identified as “Mrs. Neely” along with a “Gene Neely” also incurred $396 worth of massages on February 21, 2021. It is unclear to 209 Times who or how this particular bill was paid. Another receipt in question shows that a $319 pair of sunglasses, a $132 cardigan sweater and $33 worth of SPF 50 sunscreen was purchased by LMFD permit clerk Karolina Ochoa on 2/26/21. The receipt was received by LMFD on 3/9/21. On 3/15/21, Karolina Ochoa submitted a $522 money order made payable to US Bank, which 209 Times believes likely went to reimburse Cal Card. Ms. Ochoa is no longer employed at LMFD.

According to Division Chief Larry Madoski, Nuemiller & Beardslee attorney Lisa Blanco Jimenez provided sexual harassment training during the February “retreat”. Yet on July 15, 2021, Ms Jimenez reimbursed Cal-JAC $974.02 from her personal checking account. Ms Jimenez, whom also currently serves as LMFD’s attorney, provided 209 Times a handwritten breakdown that showed that Cal JAC was reimbursed for two hotel nights, room service, one massage and one facial. 209 Times has asked Ms Jimenez, Interim Chief Capper and the LMFD Board of Directors if this payback should be interpreted as a demonstrated consciousness of guilt, but all have so far refused to answer.

209 Times asked Division Chief Larry Madoski if Cal-JAC receives any money from the government, and if his explanation that the funds were “unrestricted” meant the funds could be legally spent on non firefighters receiving massages, facials and alcoholic drinks.

“I do know that we have an internal committee that meets and we are drafting a “best practices“ of what the LMFD considers would be appropriate use of those funds. It will most definitely include NOT using the money for alcohol and massages!
Not exactly sure on the gov money question…they don’t have a policy on not using the money for those purposes. But again, it’s important to know that it’s reimbursement. Which means the purchase had to already been made. So if the FC {Fire Chief}uses district funds to make the initial purchase you can see the issue.”

“Okay, so what it looks like he did {Gene Neely} I need to confirm this, but was to charge his credit card (cal card) and then had me submit for reimbursement so that he did not show it on the registrar of warrants for payment. Essentially it means he tried to pay for it before it had to be placed on the doc we use to pay bills. Make sense? Like making a purchase and before someone found out…had jac reimburse the credit card.”

209 Times reached out to Cal Card and Cal-JAC to ask if massages, facials and alcoholic drinks are a necessary part of legitimate government business.

CAL-Card is a State of California’s Purchase Card Program. At least according to their website, “agencies must adhere to all procurement laws, regulations, policies, procedures, and best practices”. Local agencies (such as LMFD) may also “establish additional internal policies, procedures and limitations for cardholders.”

“Typically if there is an issue of the nature you are inquiring about, that is a conversation we would have with the agency in question not with an organization inquiring about conversations we may have with the agency including steps taken, outcome, etc., if that was your intent. In addition, the State of California does not typically get involved in issues like this as it pertains to local governmental agencies…we don’t normally get inquiries about issues/behaviors associated with a particular entity that is using one of our contracts.”

Despite Cal Card Administrator Seiferling’s initial reluctance to cooperate with 209 Times’ investigation, she ultimately did acknowledge the following:

“As to your reported misuse of CAL-Card, any entity that is using this contract is required to abide by the terms and conditions as set forth in the contract….It does indicate CAL-Card cannot be used for personal use.”

209 Times asked if Cal-JAC funds are in fact taxpayer funds and if it was appropriate for LMFD to use government funds to pay for massages, facials, alcoholic drinks and four hotel room night stays (with emerging evidence of even more stays) for veteran fire chiefs and civilian support staff who never were or are aspiring firefighters.

“Cal-JAC funds are provided through a line-item in the California state budget for registered apprenticeship training programs to reimburse fire agencies for training they have provided. Cal-JAC directs these funds to participating fire agencies, and they are allocated locally under rules and procedures established by the local fire agency.”

This is a developing story.