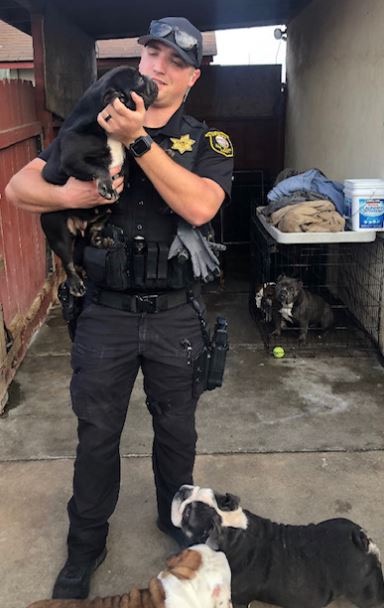 LATHROP- On January 30th, Pedro Maldonado Victoria was arrested on multiple charges. According to the Sheriffs Office the investigation began on Saturday, January 25th when a woman spotted several English bulldog puppies roaming on the loose in the 2000 block of E. Louise Avenue. She then contacted law enforcment after she “saw two men exit the home wearing what appeared to be bloody rubber gloves”.

In a statement release by the Sheriff’s Office the details become more gruesome:

“It was quickly discovered the owner of the home, Pedro Maldonado Victorio, was currently being investigated by Manteca Animal Services for performing animal surgeries without a license.

The dogs were taken from the home by Lathrop Animal Services and provide care at a local veterinary hospital.

The investigation didn’t end there. Search warrants were later executed at multiple locations including Lathrop and Manteca. The search warrants turned up more evidence of illegal surgeries, $13000 in cash, and 18 additional dogs were rescued – a mix of English and French Bulldogs.

The dogs were kept in overcrowded kennels and half required treatment from a real veterinarian.Sadly, the remains of deceased dogs were found as well.

Mr. Victorio was booked for cruelty to animals, practicing veterinary medicine without a valid license, and transporting a controlled substance.

This investigation was a collaborative effort between multiple agencies, including Lathrop Police Services, the Manteca Police Department, Bureau of Investigations, the Office of the District Attorney, Lathrop and Manteca Animal Services.

Lathrop Police and Manteca Police are looking for any potential victims in the case. Please contact law enforcment if you purchased a dog from Mr. Maldonado Victorio or he performed surgery on your pet.