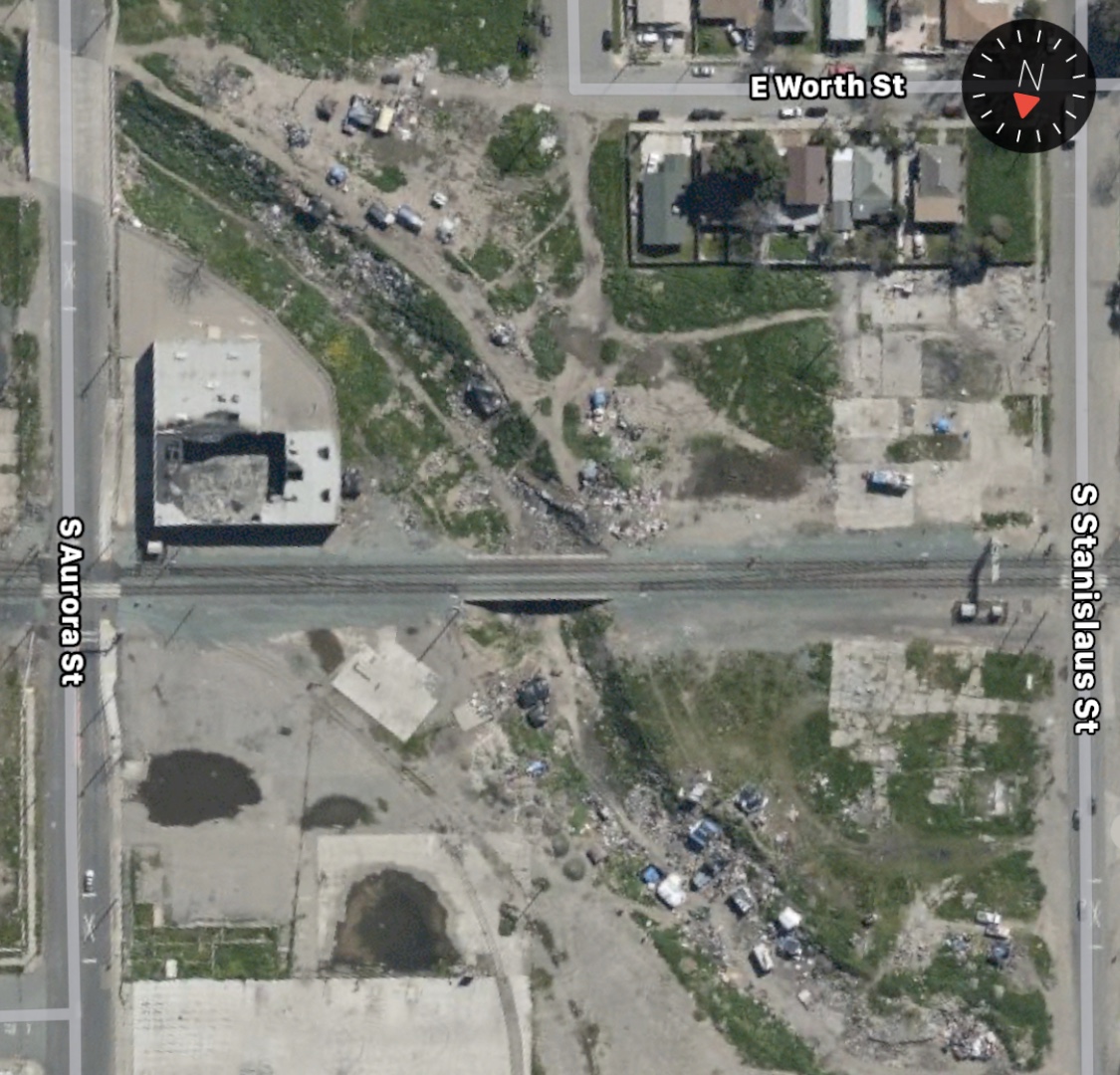 Two weeks ago I visited the street I lived on when I was born in south Stockton. What was supposed to be just a quick photo shoot turned into an impromptu tour of the entrance to a a homeless transient encampment in the middle of the neighborhood when a homeless man approached my crew and I to apologize for the trash. He showed me around when I asked him what could be done to alleviate the unbearable living conditions. As we walked amidst tents and parked RV’s we had to endure not only the conditions, sights, and smell, but also burning trash, the smoke of which travels to the adjacent residential homes. He showed me a running fire hydrant they use to wash their clothes in the gutter. He told me regular trash service pick ups and portable rest rooms would help greatly as they are forced to relive themselves there in the open field.

I listened to his suggestions and told him I’d return with food and clothes to help them stay warm through the winter. The next week, last weekend, I returned with those items. Not finding him, I decided to still take advantage of the trip and give those items to those in need. This time I took a guide as it turns out the people that live in those areas are very protective of their space and very distrustful of outsiders for various reasons. Having a guide that knew the secret knock so to speak provided my team and I the uncommon opportunity to travel deep inside the trenches away from the public streets. This was only possible as our guide was recognized to them as someone who used to provide them with contraband we should say. Reformed now, he regularly goes there to donate items to them they need. Without him it would not have been safe to be there at all.

It’s one thing to see pictures or drive by a few tents on a public sidewalk, but the trenches near downtown Stockton are a whole other world. There are several structures, improvised houses, tents and RV’s. Someone of these are decorated with fences and yard decorations, like you’d see in any normal neighborhood. This reinforced m to me their humanity and how the human spirit will shine through despite some of the most unbearable conditions. There are none of the amenities we take for granted like running water or restrooms. No heaters or stoves. Open fires that often get out of control take the place of those. There are people out there with newer cars as well as cars being dismantled in the open.

I spoke to many people as I passed out items. Sweatpants to help keep warm was the number one request. Off to the distance a police patrol cruiser could be seen in the distance and in speaking to officers before even police stay away from these areas unless the have to go there. The size of the encampments, which can even be seen from space satélites have only increased as the homeless population has exploded in Stockton 200% since 2017. This growth has been for various reasons including rent prices also going up 25% on average during the same time. But the hard reality is that many of these people living in these conditions choose to do so for various reasons including drug addiction and criminal records such as sexual assault and abuse. There exists among our city a hidden society that has its own rules and turf boundaries. $50 million to the inept “homeless task force” or $130,000 a year “homeless czar” has done nothing measurable to alleviate the crisis. The situation is way worse than people realize.

It is a public safety and health crisis as well as environmental. Test results show levels of E Coli and other germs have polluted our water ways that are then processed through plants to be our drinking water. Freeways are being burrowed into and sculpted with steps to be easier to climb. Freeways and empty buildings are catching fire regularly from the fires used to keep warm and cook as well as arson. Action is required now. Enough studies and summits have taken place. It is the duty of our leaders to now take action or remain derelict in those duties.

By far I would estimate the number one contributor to the homeless population is drug and alcohol addiction, which our guide would only confirm. Next would be mental health and the combination of the two. Those are complex problems that won’t be somber immediately, but there are things that can be done.

What I would suggest based on research and first hand conversations with the homeless population:

What is for certain is that the status quo cannot continue. It is not only unbearable for those enduring the reality, but a threat for everyone else should diseases break out, not to mention the burning freeways and polluted waterways. And children. There are children living in these encampments, sometimes being found unattended!