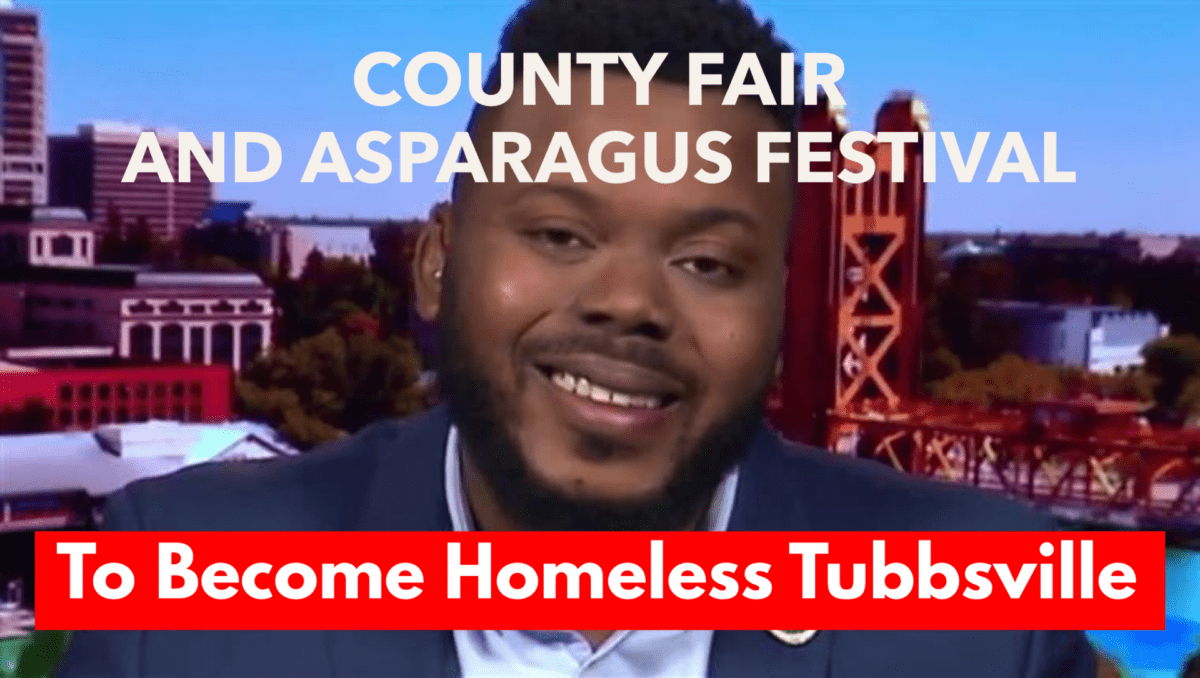 STOCKTON- On 10/14/2020 a meeting was held with The City of Stockton, The California Department of Food & Agriculture (CDFA)(which oversees the Fairgrounds Property) and the San Joaquin Continuum of Care (aka homeless task force that Mayor Tubbs and County Supervisor Kathy Miller) to make official the planned closure of the San Joaquin County Fair.

After ignoring the crisis for the majority of his time as mayor, as part of a major “Pilot Project” being pushed by Mayor Michael Tubbs and Governor Gavin Newson (Former Mayor of San Francisco) the gates of the Fairgrounds will officially close on 10/23/2020 and the 255 acre Fairgrounds property that has been around for 160 years, will be converted to the state’s first homeless reservation. According to sources in the know this will not only service Stockton’s soaring homeless population, but may likely also service the homeless populations from San Francisco, Oakland, and Sacramento where there are homeless camping along waterways. This deal will essentially make Stockton the official homeless capital for the Northern part of the State of California.

According to the San Joaquin County Fair CEO Troy Bowers, there are already 10 mobile trailer units on the grounds which are already occupied, and 90% percent of the Fairgrounds staff has already been laid off.

During the meeting between the City and the State, John Quiroz of the CDFA says that the Fair could be ready to service the homeless as early as this winter as “Warming Centers.”

This deals a major blow to the city of Stockton and specifically south Stockton which already struggles with blight, lack of investment, and bears the brunt of the heaviest concentration of homelessness. South Stockton briefly saw hope of possible investment and revitalization when the San Joaquin Asparagus Festival decided to relocate to the Fairgrounds. Tony Noceti, owner of the San Joaquin Asparagus Festival and Stockton 99 Speedway says, “This is incredibly sad for not only myself and my family, but the entire County of San Joaquin. Families in Stockton have already lost so much, to think that any leader would think selling out its community is a good idea, clearly isn’t fit to lead.”

It’s worth noting that 70% of Mayor Tubbs’ contributions have come from the Bay Area, primarily San Francisco where he’s spent so much time away from Stockton that his wife was one of the “Bay Area Women of the Year” in a San Francisco magazine. He is also endorsed by Gov. Gavin Newsom for re-election and is recorded on several podcasts and speeches in the Bay Area speaking about homelessness as needing “a regional” solution. Critics have charged for years that he has been receiving so much support from Bay Area millionaires and elected officials because they needed a nearby city to offload their homeless on. Tubbs’ first fundraiser dinner for his re-election campaign as Stockton’s mayor was also in San Francisco, which will now benefit from having somewhere to send their homeless.