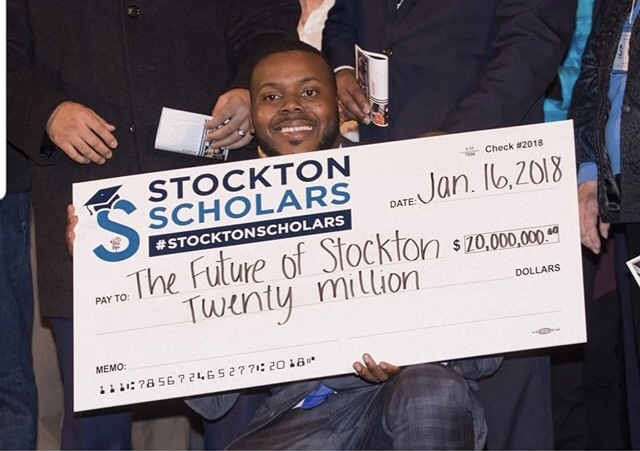 STOCKTON- While mayor Tubbs sends out text messages from the 916 area code as part of his campaign message that he’s brought $20,000,000 for scholarships, the truth is quite different. Three years ago Mayor Tubbs hosted a press event declaring $20,000,000 was being given to provide scholarships to “all Stockton students”. The details however, prove otherwise beginning with the fact that Stockton Scholars discriminates against students who are not part of the Stockton Unified School District, which Stockton Scholars has a contract with. This contract is problematic when considering that “Stockton Scholars” is really the Reinvent Stockton Foundation (RSF). Lange Luntao is both the executive director of RSF and an SUSD school board member. While Luntao and Tubbs advertise that they provide “tuition”, the reality is the scholarships are for $1,000 for students going to a UC which run $40,000 a year and the $500 for community college students are eclipsed by the fact that the first two years are free in California already.

Immediately after the announcement in 2017, reporters asked Tubbs where the money was coming from. Tubbs told Kay Recede Of Fox 40 during questioning aired live on the Recordnet’s Facebook live feed that the organization would receive $4,000,000 a year for the following 5 years to total $20,000,000 which is the amount of the large check he held up on stage.

The truth is after checking the public records for the last three years, Michael Tubbs and the Reinvent Stockton Foundation he founded the same month he took office, has never received any subsequent payments of $4,000,000, only the original. And if he has, he has not reported what should be over $8,000,000 by now as required by law.

What the records do reveal is that the majority of his tenure as mayor has been spent fundraising and using city staff to assist him, in adding money not to the city coffers, but to his own foundation that he is also the Board Chair of.

Last year Tubbs was gone so often from Stockton promoting his nonprofit foundation business that he spent $9,000 a month on average of campaign funds traveling and eating outside of the city he was elected to serve. The ones being served appear to be himself and his friends who work for his foundation.