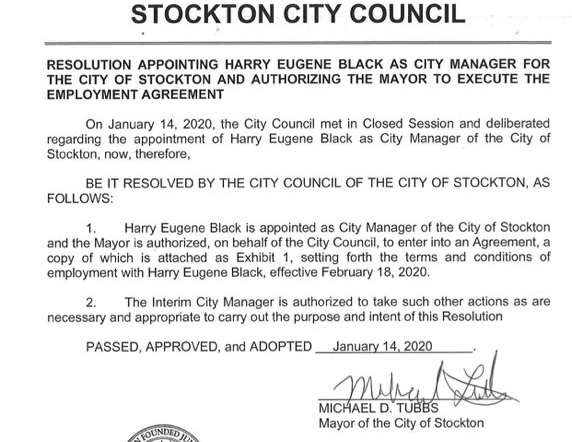 STOCKTON- When Harry Black left Cincinnati, Ohio, that city gave him a severance package of $644,000. When we inquired about Mr. Black’s alleged multiple transgressions, including inviting a female subordinate to a Denver strip club called La Boheme Gentleman’s Cabernet that Mr. Black later claimed he did not realize was a strip club, Cincinnati’s public information unit wasn’t too happy to talk to 209 Times.

“We don’t want Cincinnati’s name our any of our names associated with him.”

Since our last city manager, Kurt Wilson, is suing Stockton for wrongful termination, 209 Times thought it would be a good idea to find out how much the City of Stockton has promised to pay our new city manager that nearly all our insiders expect won’t be here for too long:

Here’s the numbers according to a contract signed by Mayor Michael Tubbs on January 14, 2020:

Mr. Harry Black will receive $270,000 a year, plus $750 a month car allowance, plus $400 a month “technology allowance”, plus $18,000 moving expense, plus 30 days annual vacation, plus 15 days annual sick leave, with those balances oddly being commenced on day one. He will receive an additional 10% of his salary going to his deferred compensation. In addition he will receive health care and life insurance benefits similar to “other department heads”. He also receives an uncapped expense account and “professional development” pay including for his travel.

Upon a forced departure, the City of Stockton guarantees Mr. Black 30 days notice along with an additional 9 months of guaranteed severance pay, and reimbursement of any unused portion of the 45 days of vacation/sick pay he was granted on his first day of work, which quite possibly could be longer than Mr. Black stays in Stockton.