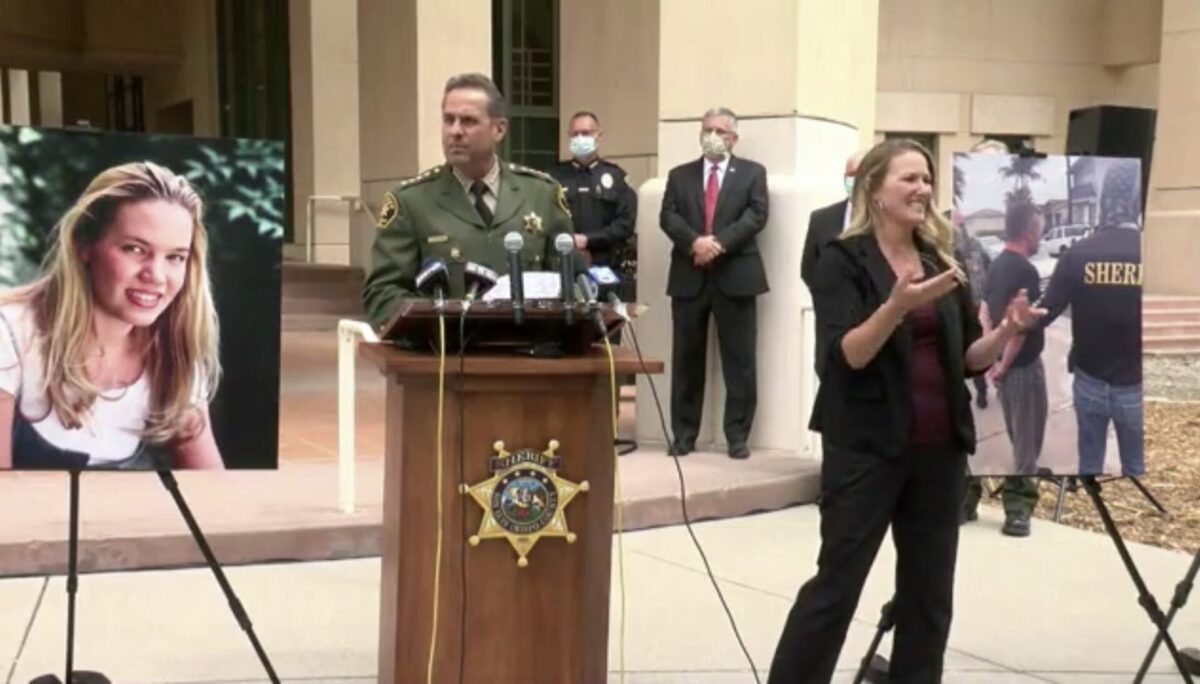 CONTACT: Tony Cipolla
PHONE: (805) 781-4547
TYPE OF INCIDENT: Paul Flores Arrested for the Murder of Kristin Smart
DATE AND TIME OF INCIDENT: 4-13-21
PLACE OF OCCURRENCE: San Pedro, CA
VICTIM INFORMATION: Kristin Smart, 19 Stockton, CA
SUSPECT INFORMATION: Paul Flores, 44, San Pedro, CA
DETAILS OF NEWS RELEASE: San Luis Obispo County Sheriff Ian Parkinson announced today a major development in the case of missing Cal Poly student Kristin Smart. The prime suspect in that case, Paul Flores, has been arrested for her murder. “After 24 years we have finally brought justice for Kristin,” said Sheriff Parkinson. “And hopefully some closure for the Smart family and peace to our community.” Flores was arrested and taken into custody in San Pedro, CA on 4-13-21 for the murder of Kristin Smart. Additionally, his father Ruben Flores was arrested in Arroyo Grande, CA on 4-13-21 as an accessory to murder. In May of 1996, Smart went missing from the campus of Cal Poly. The last person to see her alive was Paul Flores, who has remained the prime suspect in her disappearance. “I am extremely proud of all the dedicated investigators who worked tirelessly over the years to solve this case,” Sheriff Parkinson said. “It’s taken many years to get to this point, but as I’ve always said, it’s not what you believe, it’s what you can prove. And we can finally say we have done that today.”

TIMELINE OF EVENTS: Kristin Smart was a 19-year-old Cal Poly freshman in May 1996. She was last seen on May 25, 1996 at approximately 2:00 AM near the intersection of Perimeter and Grand Avenue on the Cal Poly campus as she walked home to her dorm from an off-campus party. Kristin was last seen with Paul Flores, a 19-year-old male freshman who walked home from the party with her. Kristin was reported missing to the Cal Poly Police Department on May 28, 1996. Cal Poly Police handled the initial investigation into her disappearance with the assistance of Investigators from the San Luis Obispo County District Attorney’s Office. On June 26, 1996, almost a month later, the San Luis Obispo County Sheriff’s Office assumed the lead investigative role in the case, and it has remained an active investigation ever since. On January 3, 2011 Ian Parkinson was sworn in as Sheriff and intensified efforts to find Kristin and hold the person responsible for her disappearance accountable. In late 2016, the Sheriff’s Office discovered additional evidence which confirmed Paul Flores was a suspect in the disappearance of Kristin Smart. In 2019, Sheriff’s Detectives interviewed a witness in the case that was not previously known. With the discovery of new evidence and a new witness, Sheriff’s Detectives secured a court order authorizing the interception and monitoring of Paul Flores’ cell phone and text message communications. In February of 2020, Sheriff’s Detectives served search warrants at the home of Paul Flores, as well as his sister, mother, and father. Physical evidence recovered during these searches led to the service of an additional search warrant at Flores’ residence in April of 2020. In March of 2021, Detectives served a search warrant at the Arroyo Grande home of Ruben Flores, the father of Paul Flores. Additional evidence related to the murder of Kristin Smart is discovered at the site. April 13, 2021, Paul Flores is arrested for the murder of Kristin Smart. That same day, his father Ruben Flores is arrested as an accessory to murder. The Sheriff’s Office would like to thank the agencies which have assisted with this investigation including the Los Angeles Police Department, Los Angeles County Sheriff’s Office, Kings County Washington Sheriff’s Office, Clackamas County Oregon Sheriff’s Office, FBI Los Angeles and Santa Maria Field Offices, San Luis Obispo County Sheriff’s Office Detective Division, San Luis Obispo County District Attorney’s Central Coast Cyber Forensic Lab, DOJ Goleta Lab, Natural Investigations Company, Serological Institute Richmond, CA”.