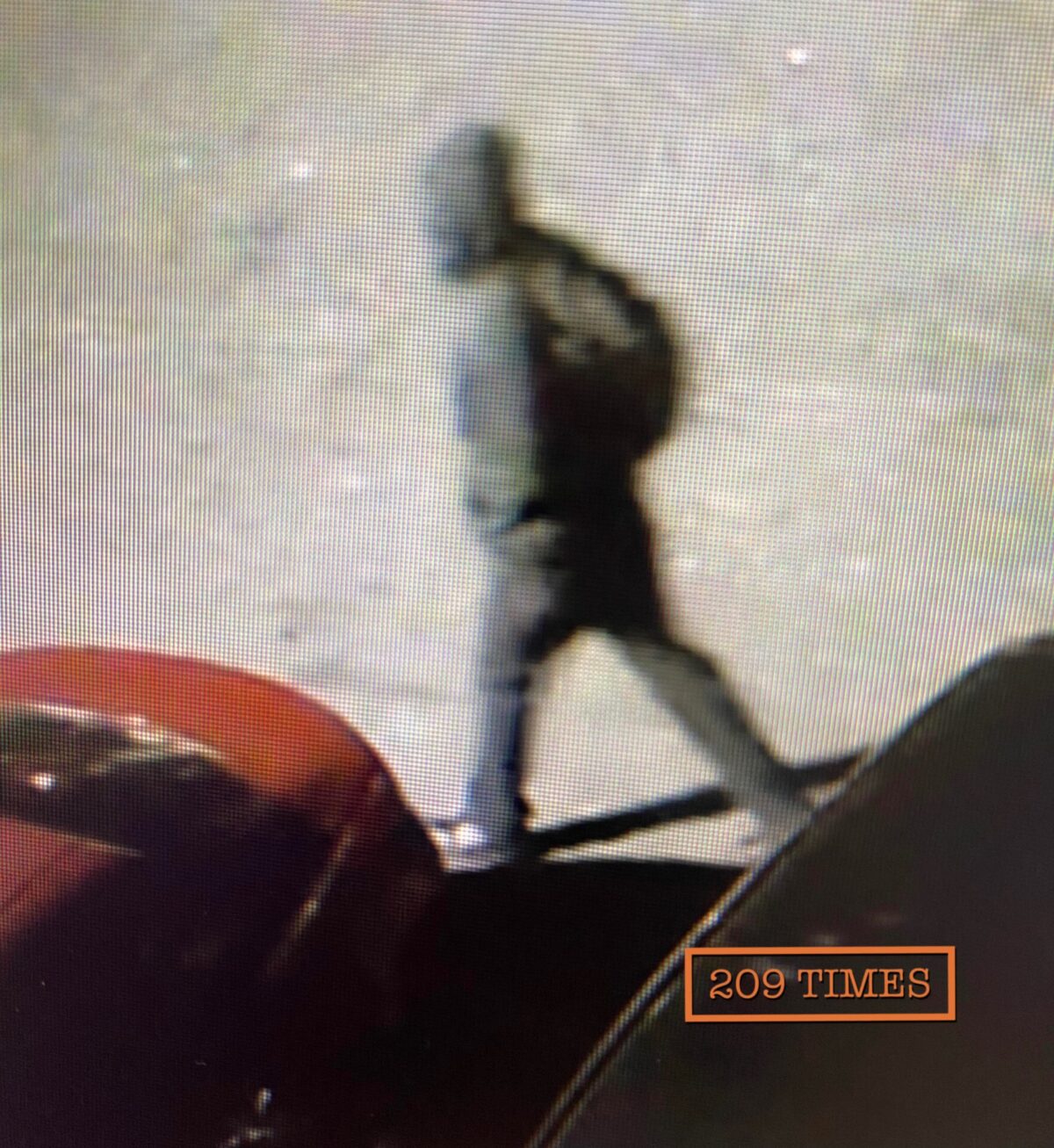 STOCKTON- Wesley Brownlee is accused of beginning his murder spree of mostly Mexican men (and two who may have been mistaken as) 18 months ago. 18 days after 209 Times broke the story that a serial killer was active in Stockton, Brownlee was arrested while hunting for another victim at Panella Park while police were tailing him.

This is what our own investigation has uncovered about Wesley Brownlee (Some of the details were known earlier, but we chose not to make public to not jeopardize the investigation of Stockton PD):

It appears obvious to us that he was targeting Mexican men, some of whom happened to be homeless. In video footage of one of the homicides, it appears that Brownlee ignores a homeless white woman riding a bike in close proximity to the murder, and instead waits to ambush a Mexican man coming home from work.

Of the 7 victims, 5 were Mexican males, the one survivor says she is often mistaken as a Mexican male, and Stockton Police Chief McFadden says it’s possible the white victim may have also been mistaken to be Mexican in the dark. 4 out of the 7 were homeless.

He was born in Mississippi in May 1979, and has resided in Stockton where he’s suspected of killing five men and attempting to kill a woman. The first known victim was killed in Oakland on the 5800 block of Harmon Ave between 57th Ave and Seminary Ave. As it turns out, his 65 year old mother used to live at 1459 Seminary Ave just four blocks away from the first homicide of Juan Vasquez Serrano on April 10, 2021.

On August 30, 2022 Jonathan Hernández Rodríguez was murdered at the 800 block of East Hammer Lane at an apartment complex where Brownlee’s mother currently resides just doors down from the apartment of the victim. During our investigation it became clear that the homicide of 21 year old Jonathon was different than the others and seemed like the killer knew him and what time he’d be arriving home from work. The killer entered the property through an opening in a broken section of the gate at a discreet corner on the back side of a section of the complex. The killer can be seen breaching the gate and walking through the court yard of the section of that complex where his mother lives to reach the parking lot. He then walks around the carport with his abnormal gait appearing to look for someone. Moments before he enters the carport, a homeless white woman riding a bike with a trailer is seen in the same area as him. Minutes later Juan arrived home from work in his car. As he backs up in reverse to his parking space, the killer dressed in all black, with a hoodie, mask, shiny black shoes, and knowing he’d be on cameras he wears a backpack appearing to disguise himself as the homeless transients that use that opening in the gate as a short cut everyday, walks up to the front of the vehicle and shoots Jonathon through his window as he sat in his vehicle. He then runs away back through the opening in the gate.

An online background check of Wesley Brownlee lists a Solid Blue Transport, LLC as a former employer. The dates of employment oddly only run for one day on April 23, 2022. The listed address of that business is his mothers listed apartment address just feet away from the opening in that gate and just a few doors down from the apartment where Jonathon lived.

On September 21, 2022, Juan Cruz was killed at the 4400 block of Manchester Avenue just feet away from Pacific Pointe apartments where his mother also once lived. The video police released to the public is of him walking through the Pacific Pointe apartments. It shows him turn the corner in the direction of Manchester where moments later Juan would be brutally murdered on the sidewalk while he was going to his vehicle to go to work.

After Brownlee was arrested, a search warrant was served by the SWAT team at his apartment just a block away from where Salavdor Debudey Jr was murdered in the parking lot of Popeyes.

Brownlee was convicted of possession of cocaine base aka crack with intent to sell, three times. In 1997, 2014, and again in 2016. He served two year prison sentences twice, his last probation ended in 2020. In 2016 he only received 16 days. In June 10, 2022 he was charged with unsafe speeding in a commercial vehicle, just a month before murdering Paul Alexander Yaw at Holiday Park, the first victim in north Stockton.

Brownlee also had criminal traffic violations in Nevada and Arizona including failing to stop at a port of entry.

The first homicide occurred in Oakland, then 6 days later the first attack in Stockton occurred near downtown. This attack is followed by 14 months of no apparent activity with the gun used, then over the summer of 2022 5 victims are murdered during hours of darkness in north Stockton. The areas of attack were also pockets of low income housing or close proximity to apartment complexes.

All of the homicides are connected through ballistics, meaning all of the shots fired came from the same weapon.

According to profilers and the FBI there are 4 Types of serial killers (Visionary|Mission Oriented/Hedonistic/ Power and Control) and 2 main categories (Organized/Disorganized). The Shadow Stalker may have aspects of more than one type.

“A Mission-orientated serial killer is someone who kills in order to ‘rid’ society of a specific group of people.

For example, they might be racist against a certain ethnicity or religion. Or they might target sex workers or homosexuals.

These kinds of killers often believe that they are doing society a favor. In their heads, they have a purpose. It is their mission to kill these people. As a result, they typically won’t stop until they have been killed or caught by law enforcement.

An important point to note is that they are not psychotic. Unlike the Visionary killer, the Mission-orientated killer is not out of touch with reality. He does not suffer from hallucinations or delusions. God or some other entity is not commanding him to commit these acts. i.e. His decision to kill was a decision that he made all by himself.

Usually, this type of serial killer tends to be organized. They plan their crimes and can live a perfectly normal life. In addition, they tend to kill their victims quickly. For example, they might use a gun because it is quick and efficient. There will be no attempts to “prolong” the kill or get further enjoyment out of it. As a result, the crime scene will contain no signs of sadism or torture.

Mission killers tend to put distance between themselves and their victims. Unlike Hedonistic and Power/control killers, mission killers will often choose a gun over using a knife or their hands.

Mission-orientated serial killers can be meticulous and obsessive. Feelings of revenge and hatred are often a driving factor behind their crimes. They are getting back at a part of society. In most cases, they tend to stick to their own geographical area.”

As a result of 209 Times breaking the story on September 27, in disregard to law enforcement wishes and mainstream media attempting to discredit us, once the story became public it went national then international. After breaking the story, we then had to double down on the validity of our story and Motecuzoma Sanchez made a personal video announcement posted on 209 Times warning the public that the threat was real. The next day City officials admitted in fact someone or possibly multiple people were responsible for “a series of homicides connected through ballistics” aka a serial killer was on the loose. As a result the reward offered ballooned from $0 to $20,000 to $125,000, which led to community tips that identified Brownlee as the suspect. SPD then began surveillance on him up until he resurfaced and attempted to hunt another possible victim the night he was arrested on October 15 at 2:00am at Panella Park while wearing a dark hoodie, mask, and illegally in possession of a pistol that has yet to be confined if it’s the same weapon used in the other assaults. Frank Gayaldo also played a significant role in vetting tips sent to us by utilizing his sources in and out of law enforcement, ensuring we did not reveal any details that would threaten the integrity of the investigation.