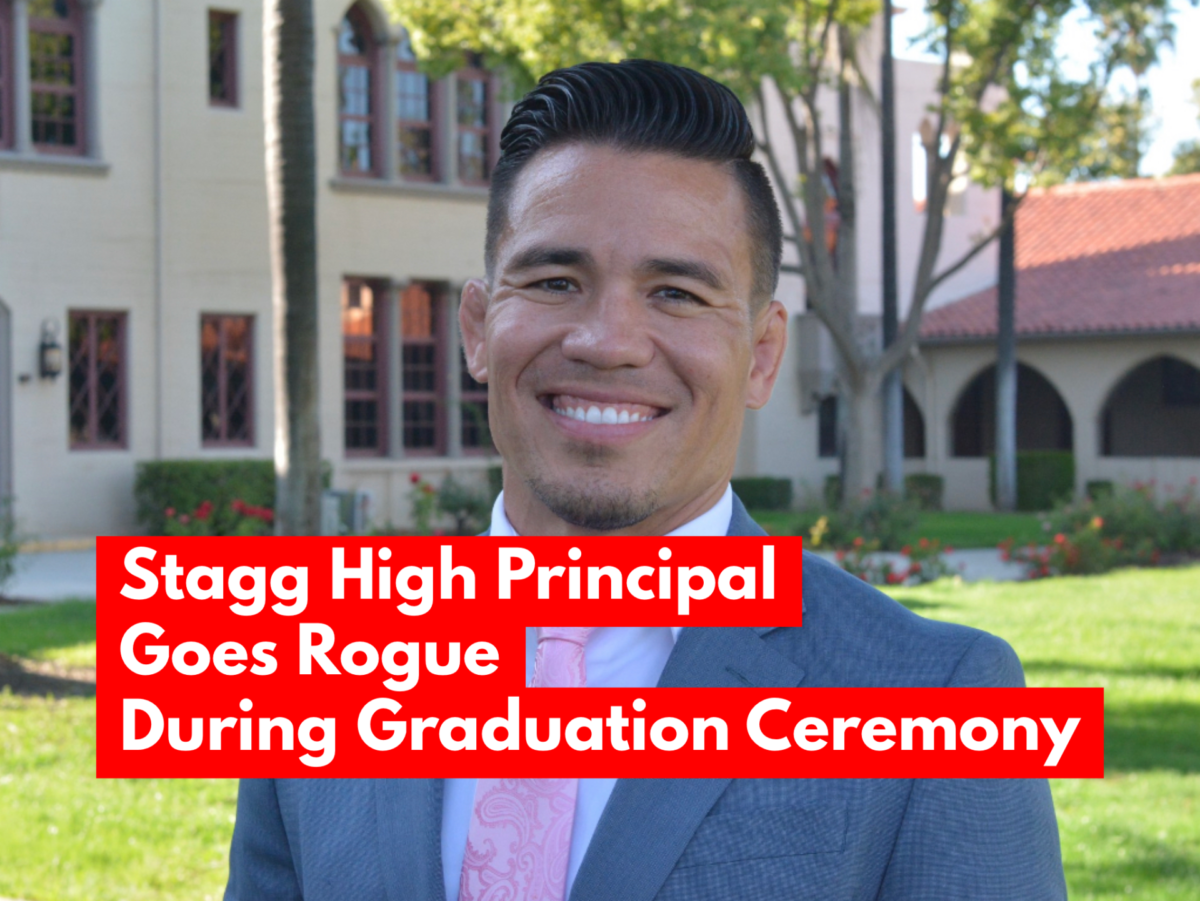 STOCKTON- Principal Ben Nakamura was pulled off stage today and escorted off campus. The incident occurred during Stagg High School’s graduation ceremony. Witnesses say he started ranting on the microphone about his importance in the community and being removed as principal by the new leadership on the board that is no longer under the control of John Deasy, Don Shalvey, former mayor Michael Tubbs or any other “reinvent stockton” operatives. They say he also violated COVID-19 protocols established by the district in not only giving his speech, but also having direct contact with students.

We’re told by SUSD public information officer, Melinda Meza who was in attendance, that several parents complained after being offended he was ranting about personal issues when they were there to celebrate their children’s accomplishments. Nakamura’s was approached by Mr. Biedermann and an SUSD Police Officer Lieutenant Marquez around 10am and pulled off stage. He was then escorted off campus at around 10:15am. He proclaimed in his speech, “they kicked me out”. Then was literally kicked out.

UPDATE: The district has released the following statement:

“Graduations are a time to celebrate students and their families for hard work and dedication.

Stockton Unified School District received several complaints from parents that the principal at Stagg High School used the graduation as a platform for his personal grievances.

‘This was highly inappropriate,’ said one mother. ‘My son worked hard during COVID and wanted this day to be about him and his fellow students. Not some HR stuff and drama’.

COVID protocols were clearly articulated to our Secondary Principals and they were not followed by the Stagg Principal.

No speeches were to occur and were to be filmed for release in the evening. This was the guidance from the CDPH and the expectation from Secondary Education, to ensure that our COVID exposure was minimal.

The Principal prepared and gave a speech anyway.

The principal’s speech consisted of reasons he came to Stockton and said he is being kicked out.

Mr. Nakamura’s was approached my Mr. Brian Biedermann, who oversees graduations and informed him that he would not be participating in the other graduations.

He was escorted off campus and SUSD Public Safety was there as standard procedure at Graduations for security and safety of all”.