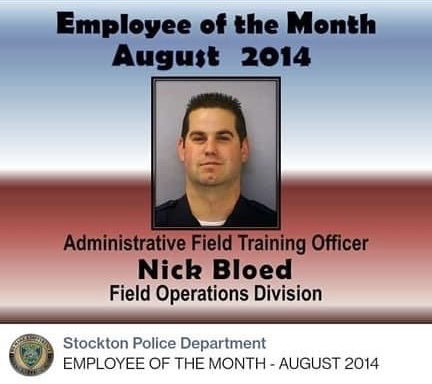 STOCKTON- According to the San Francisco Chronicle, Stockton Police Sergeant Nicholas Bloed has been placed on leave after a woman filed a lawsuit against him for sexual battery, seeking damages for emotional suffering and psychological treatment.

The Chronicle reports, “The woman said she is a low-income house cleaner who has sometimes engaged in prostitution and has been convicted of drug and theft crimes.”

According to the complaint filed with the City of Stockton, the unidentified woman says she was stopped for driving a car without license plates or registration tags. Bloed let her go without a ticket and instead got her number to text her.

According to the complaint over the course of several months the two would engage in sexually intercourse, but he’d never wear a condom as requested. The Chronicle states, “The woman said Bloed found her in a parking lot several weeks later, chased other motorists away and said he wanted oral sex and intercourse, and she complied, according to the filing. She described similar encounters in February, after he had been promoted to sergeant, and twice in March. She said she told him he should wear a condom but he refused.

Bloed became upset when he learned she had confided in a friend in mid-March but continued his pursuit of her, the woman said. She said she finally reported him to the Stockton Police Department a day after their last encounter, was questioned for seven hours over two days, and showed police her cell phone and the pants she had worn”.

Bloed was “Employee of the Month” for Stockton PD in August of 2014 after he shot and killed a man police say was shooting at another officer.

He started his career in 2002 as a police officer in Modesto with Modesto PD and joint SPD in 2008.