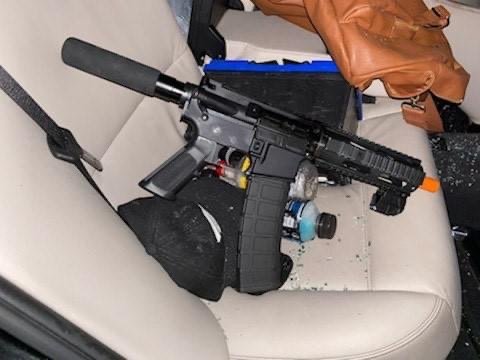 STOCKTON- Police have released the following photos and statement on the killing of a homicide suspect:

Stockton police officers were actively looking for Antwane Burrise, 39. Burrise was wanted in connection to the June 1, 2020 shooting death of Renard Thomas, 39, who was found shot multiple times inside a vehicle in the 300 block of Florence Street. Antwane Burrise had a homicide warrant issued for his arrest from this incident and was considered armed and dangerous. He was recently released from prison in April and was on post release community supervision. Burrise was also on federal probation for felon in possession of a firearm and other fraud related crimes.

On July 15, 2020, around noon, officers located Burrise inside a vehicle in an apartment complex in the 5200 block of Consumnes Drive. To prevent Burrise’s escape, officers attempted to block him in with their vehicles at which point Burrise rammed a police car. Uniformed officers gave Burrise multiple commands to surrender. At one point, Burrise accelerated backwards in the path of an undercover officer. That officer, fearing for his safety, and two uniformed officers, also fearing for the officer’s safety, fired their weapons striking Burrise. Officers continued to give commands to Burrise to exit the vehicle and noticed there was no movement from inside. An officer then utilized less-lethal shotgun bean bag rounds to breakout the windows so officers could safely approach for an emergency extraction. Officers were able to remove Burrise from the vehicle and rendered medical aid. Medics arrived and transported Burrise to a local hospital where he died from his injuries.

Investigators believe Burrise is responsible for other shootings, street gang activity and violent crimes committed within the City of Stockton. Through intelligence gathering, we have learned there are community members who are fearful of Burrise and have been intimidated by him. We are encouraging anyone with information to please contact the Stockton Police Department’s Investigations Unit at (209) 937-8323 or if you would like to remain anonymous, call Stockton Crime Stoppers at (209) 946-0600. You may also submit a tip online at stocktonpd.org.